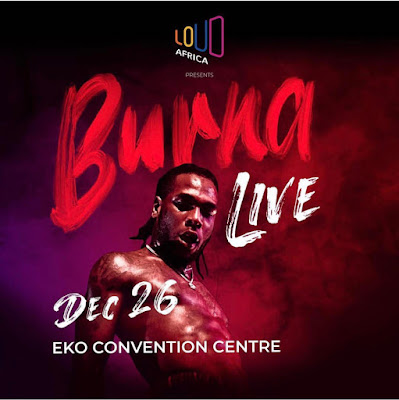 The singer, who has been praised by critics and fans alike for his sophomore album ‘Outside’ which was released earlier this year, made the announcement on social media to his multitude of followers; posting the official artwork.


Several fans have since responded excitedly - with majority of them making fervent promises of attendance in the comments, whilst asking the singer what to expect at the concert.

Put together by Loud Africa, other details regarding the concert like the list of other performers are yet to be revealed but many have speculated the concert will certainly recruit some of the industry's most sought-after acts, considering Burna's streak of success, popularity and wide acclaim since his emergence in 2012.

‘Burna Live’ will mark a direct follow-up to the singer’s highly publicized concert at Brixton Academy, O2 Arena in London, which was entirely sold out and was met with overwhelming positive reception from attendees and the media.

Tickets to the concert can be purchased at NairaBox.