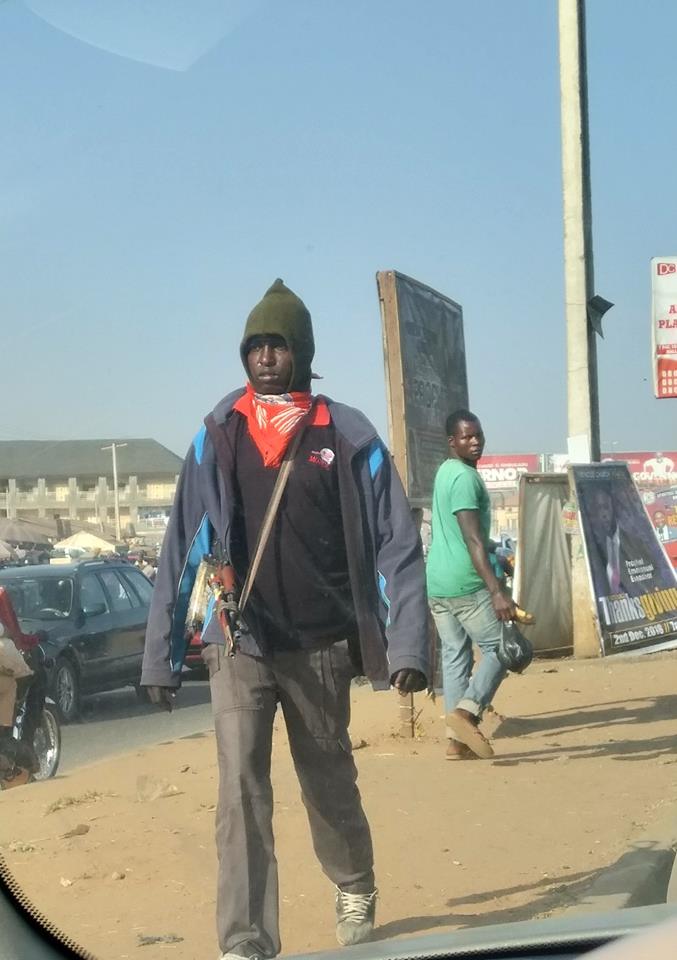 This man was spotted with a gun
Olumide Olaniyan, a Nigerian has shared his experience recently after he saw a man walking with an AK47.
The man raised the alarm on Facebook after spotting the man (pictured above) who is believed to be a civilian, roaming the streets in Nyanya, Abuja with the gun hung on his body.
Olumide wondered if the man with the gun is one of the herdsmen terrorizing innocent Nigerians.
Read what Olumide wrote below:
"I was driving along Mararaba-Nyanya road this morning. I saw this man with a gun that looks like AK-47 or an automatic gun, I initially thought he is a security personnel, but, his dress, shoes and overall shabby look suggests otherwise.

"I was tempted to go ask him about his ID card and why he was such a psychological violence to onlookers. Then, I remembered Maama Sunde's counsel those days I used to do student activism at the University of Bariga, "ma se subolation si oro oloro, [don't interfere in other people's matter, face yours]".

"I felt that it is my business to ensure that there is safety and security in the land. I felt like questioning this dangerous looking man, on behalf of Nigeria. But, my sense talked to my brain, they both forced me to drive on. I will never know if the man is a vigilante, or a state security personnel. That certainly was not a Dane gun. That clothing was not a security personnel uniform. An undercover agent won't expose himself with an automatic gun in public. Our country is currently a fragile state, no onewho isn't a security personnel, should be allowed to move around with arms which may distress others.

"Could this man be one of those so called Malian herdsmen that have flooded Tangaza LGA and other areas in Sokoto state? Nigeria needs to protect its territories from (possible) internal and external aggression. When people just walk along, unbothered with this kind of an uninformed and ununiformed man in their midst, it means we are drifting towards Hobbesian Democracy..."