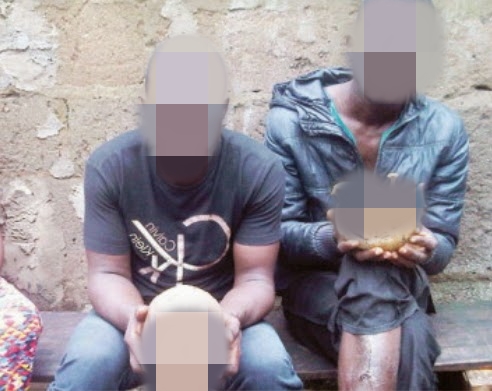 The Osun State Commissioner of Police, Fimihan Adeoye, has paraded a herbalist identified as Amos Sulaimon, in Osogbo, alongside his client, for engaging in killing for ritual.

According to PUNCH Metro, while speaking to journalist during the parade, the ritualist said that he told his client, Supo Bamidele, to bring a human head and wrists in order to discourage him from engaging in money ritual.

The Police Commissioner said that Bamidele was caught with a severed head and wrist in Ile-Ife, and upon his arrest, told the police that his herbalist asked him to bring the human parts for ritual.

While explaining what transpired between him and his client, Sulaimon stated, “I am an herbalist and I live and work in Ile-Ife. Bamidele had been coming to me to seek spiritual assistance. I inherited this job from my father and we don’t engage in money rituals.


“I don’t do evil nor engage in money rituals. In the last four months, Bamidele had been disturbing me for spiritual assistance, because he claimed that his business was not doing well and that he wanted a charm that could improve his fortunes.


“Because he would not allow me to rest, I told him to bring a human head and wrist. It was a ploy to scare him away. I never knew he would go to the extent of looking for the items.”

Responding to questions from journalists, Bamidele, who sells planks, said he resorted to fortune-changing charms because he was not doing well in the business, adding that his wife and children had left him because he could not provide for their needs.

He said that he exhumed a corpse at a burial ground in Onikooko area of Ile-Ife, severed the head and wrist, and headed for the residence of the herbalist.

“I was, however, caught inside a tricycle that I took while going to my herbalist’s house. I didn’t know any of the people buried in the cemetery; I just went there and took the parts that I needed,” he stated.
Posted by Daniel Update at 11:11 AM