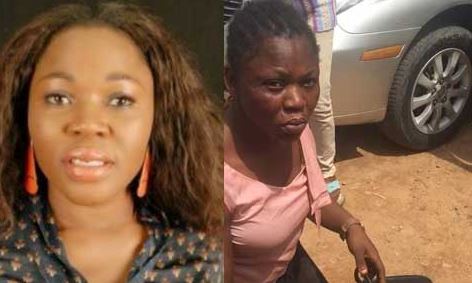 Yetunde Akilapa
Barely five months after being docked for serial stealing, Nollywood actress, Yetunde Akilapa, has been arrested again
Yetunde was nabbed, today, at Ajao estate, off Oluwalogbon, Ketu, Lagos State, while trying to gain access into a house, with her set of master keys.
She was subsequently dragged to a police station in the area, to prevent jungle justice.
Back in July, 2018, the 32-year-old actress was dragged before an Ikeja Chief Magistrates’ Court and charged with burglary and stealing valuables worth N7 million.
Police Prosecutor Benson Emuerhi had told the court that the accused committed the offences on June 27 at Mutairu Street, Shangisha, Ketu, at 2.10 p.m. .
According to him, the accused was apprehended while trying to enter the apartment of the complainant, Adeboye Lamidi.
The prosecutor also alleged that the accused, on Nov. 16, 2015 at 3.00 p.m. broke into the residence of one Oyinlola Tuga by unlocking the door with a master key. .
Tuga, who lives at Ayodele Okeowo St., Gbagada Soluyi in Lagos, reported that the accused stole jewellery, bags and other valuables worth N7 million.
Yetunde Akilapa arrested for robbery by the police in Alade, Somolu, Lagos in February 2013. She was sent to the Kirikiri Prison and after a few months, she regained her freedom in November 2013. .
In Jan. 12, 2014, she was again caught trying to steal with a bunch of master keys hidden in her brassiere at a house in Magodo Phase 2.
Posted by Daniel Update at 5:35 AM