Why I Defeated Goodluck Jonathan In 2015 - President Buhari Speaks Out 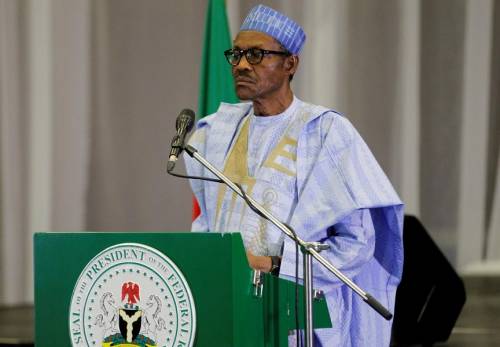 According to a Vanguard report, President Muhammadu Buhari, Monday, attributed his election victory in 2015 against former President Goodluck Jonathan to the revolt by Nigerians over glaring endemic corruption.

President Buhari stated this while declaring open, the Corruption Risk Training for Heads of Anti-Corruption Agencies of the African Union, at the Conference centre, Presidential Villa, Abuja.

He said that the pervasive nature and devastating impact of corruption in the nation before the election, was dysfunctional.

He said, “When we assumed office in May 2015, the pervasive nature and devastating impact of corruption on the Nigerian nation had become dysfunctional. The momentum for our electoral victory could not be separated from the revolt of the people against glaring endemic corruption.”

The President said that the training facilitated by the Anti-Corruption Academy of Nigeria, ACAN, the research and training arm of the Independent Corrupt Practices and Other Related Offences Commission, ICPC, was at the instance of his administration as part of the support for the war against corruption in our continent.

He said, “The fight against corruption is a battle for the souls of our different countries and it is one that we must win. Since independence our continent has suffered from the severe consequences of corruption and it is imperative that we take steps to reverse the trend.


“During the past several months, we have been taking steps to institute integrity and transparency in the processes of government and holding those who have plundered our commonwealth to account for their actions.


“However, the costs of recovery and sanctions are also enormous. While commendable successes have been recorded, it has become manifest that corruption fights back. With enormous stolen resources elements have attempted to compromise law enforcing institutions and pervert the course of justice.


“This realization highlights the necessity of building a system that focuses on preventing corruption. We continue to implement policies aimed at building resilient systems that can withstand assault by corrupt officials.


“Our steps in this direction include the full implementation of both the Treasury Single Account (TSA) and the Bank Verification Number (BVN) the Open Government Partnership, various Executive Orders, strengthening the Anti-Corruption Agencies and permitting their full autonomy.


“It is in this context of building robust preventive systems that we must understand this initiative which aims to train leaders of anti-corruption agencies in the African Union by deploying Corruption Risk Assessment Methodology for corruption prevention in our countries.


“Corruption Risk Assessment seeks to identify corruption-prone processes and procedures in organisations and recommend appropriate remedial steps. The methodology places a premium on prevention as an effective complement to enforcement in the war against corruption.


“In 2016, through support from the United Nations Development Programme, UNDP, the Anti-Corruption Academy of Nigeria acquired the capacity to conduct training on Corruption Risk Assessment. Since then, the Academy has conducted a number of these trainings.


“To showcase the growing appreciation of CRA as a tool for preventing corruption, the Anti-Corruption Academy of Nigeria has received a request for the training of Corruption Risk Assessors for ECOWAS countries from the ECOWAS Commission in Abuja.”

President Buhari said the training was an opportunity to extend the benefits of the methodology to other African countries, stressing that “it is clear that we have not taken our appointment as Anti-Corruption Champion for the continent for the year 2018 lightly.”

He expressed optimism that most of the countries have subscribed to not only the United Nations Convention against Corruption, UNCAC, but also the African Union Convention on Preventing and Combating Corruption (AUCPCC).


“This event offers a good opportunity to encourage the few countries which are yet to ratify the African Union Convention to expedite processes to do so. No efforts can be too much as we seek to rid our societies of the evil of corruption,” he said.

President Buhari who said the training session was essentially an orientation on the benefits of deploying the CRA Methodology in the fight against corruption, urged participants to embrace it and also take steps to widen the knowledge and skills imparted by supporting the training of Risk Assessors for their countries.

“The Anti-Corruption Academy of Nigeria has a robust curriculum and expertise cutting across the spectrum of anti-corruption training which can be adapted for other countries taking into consideration national specifics. To further strengthen this institution, the Academy has our support as it moves towards its objective of being an African Centre of Excellence in anti-corruption training and capacity building.


“I would like here to point out that the training on CRA can only have meaning when the Risk Assessors are put to work.


“In Nigeria, the Methodology has been deployed to a number of sectors. The most recent one being the Risk Assessment of the country’s e-government system whose report is now available and the summary presented earlier this morning. It is therefore my great pleasure to present this Report to all the stakeholders, many of whom are present with us here.


“I urge them to work assiduously to implement the recommendations of the Report. I must also commend all those who carried out the assessment and the United Nations Office on Drugs and Crime (UNODC) for supporting the process,” he said.

Speaking in an interview, the Acting Chairman of the ICPC, Dr. Usman Abubakar, said that though the TSA has helped to check-mate corruption in the system, there were rooms for manipulation before data was entered into the system, noting that contracts were awarded to individuals but at the point of procurement some ugly things happen.

He said, “We also found out that some agencies are yet to comply fully with the TSA policy. That is why we asked Mr. President to mandate all agencies to make all their payments or revenue through the TSA platform.”
Posted by Daniel Update at 11:37 AM