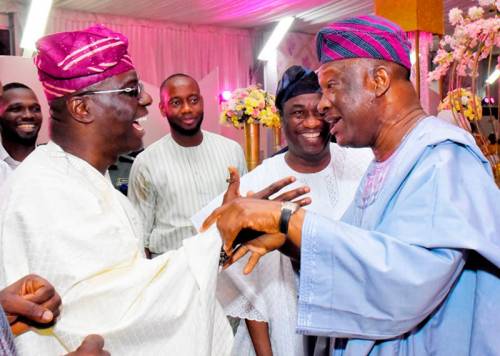 Sanwo-Olu had featured on a television progamme on Monday, where he spoke on his plans for Lagos State if elected.

However, Jimi Agbaje expressed his reservations on Sanwo-Olu's position on various subjects on the television programme and he took to Twitter, where he punctured holes in Sanwo-Olu's comments.

His words: "In an apparent response to my outing on leading TV station on Sunday night, a hurried arrangement was made to feature the panicky opposition candidate on TV. Clearly a rehashed session, here is a dissection of what he talked about.


"Continuity in Government: We will be innovative and improve all of our processes. Innovative? An attempt at innovation is what has caused the incumbent a second term. Your imposition is not on your own terms. You will not be allowed to think freely and run a government.


"Lagos deserves a free hand and independent mind; someone who is not tied to the apron strings of a Godfather. On running mate, Dr Obafemi Hamzat: Lagos is getting an amazing deal, two governors wrapped in one. Two governors wrapped in one as presented by you is an elixir for anarchy in governance. You were billed to be Obafemi Hamzat’s Chief of Staff in his attempt to run for office in 2014. He cannot and will not truly see himself as your deputy. With two powerful energies, the ego battles can only be imagined.


"On my campaign promise — we will see significant developments in waste management, education, transportation management, health, etc. You have clearly admitted that your current boss failed on the indices you listed above. As an appointee in his government, you had the opportunity to offer your two cents on how things could be better but you did not. Understandably, you cannot give what you do not have. In the inner most recesses of your heart, you know that you cannot rock the boat of the establishment that has propped you up.


"On my readiness for governance: I have been preparing for this all my life. It will be nice that you parade a list of your achievements in the public and private sector to buttress the claim that you have been preparing for this all along. In your previous roles, what were your achievements? As MD of LSDPC, how many housing units were added to solve the housing challenge? As Commissioner to Establishment, how did the lot of civil servants improve? As Commissioner for Commerce, what did you do to improve the ease of doing business? What successes can be attributed to you — Babajide Sanwoolu.


"On Lagos and the Igbos: The narrative that Lagos dislikes the Igbos is extremely false. Oh yes, Lagos does not dislike the Igbos, your political establishment does. The royal utterance of 2015 is still fresh on the mind of the entire electorate. He now works with the presidency. You must have been too busy or completely oblivious to be referring to him in present tense.


"On Technology: I believe technology will play a big part in solving a lot of problems, from modelling plans to making informed predictions and then to actual solutions. These are buzz words used at Monday morning meetings. The Lagos electorates are not docile thinkers. Technology is an enabler that is available to everyone. It is a leveler and people can no longer be bamboozled. On Sanwo Free Wifi: We are going live this week in some of these locations. Internet for knowledge, research, empowerment and ultimately for solutions. This is merely political gimmick. Lagosians know better than to be swayed be such Greek gifts. The voting populace is not data hungry. They want freedom; to live a decent life in the city they have come to know as home.They are not cheap skates to be swayed by cheap data.


"On freedom: For anyone to imply that Lagosians are slaves is just plain mischief. We will rank high in parts of the world. We will rank high? If we have not ranked high in about two decades of which you and your cohorts have been in government what can you possibly do to make such happen? Freedom is an opportunity for Lagosians to elect a governor that they can hold accountable, a governor that they can question and on whose table the buck stops. Freedom is running an open government where the finances of the state are not opaque. Freedom is allowing Local Governments to run as they should (a true third tier of government) and not as a mere appendage of the state.


"Freedom is domestication [of] the freedom of information bill. Freedom is the ability of an elected leader to choose his own cabinet. Let us not trivialize our lives and make negative assertions about ourselves. Slavery was a reality that our forefathers had to live through. You make a very good point that we should not trivialize our lives. However, in all of your public statements in recent times, you have paid homage and obeisance not to Lagosians but to whom you refer to as National Leader for the opportunity to be a candidate. In effect, you couldn’t have dared to run if you were not handpicked to be endorsed."
Posted by Daniel Update at 12:00 PM