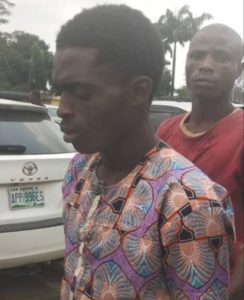 The armed robber and armourer arrested by the police

A man whose wife was killed by armed robbers on new year day has revealed that she lost her life while attempting to protect him, Vanguard has reported.

According to Mr. Akin who is still mourning the demise of his wife, “my home was invaded by daredevil robbers on new year day. While the operation was ongoing our children were in the church for the cross over service. My wife and I were held hostage by the armed robbers. My wife was killed by the robbers because she stood between the robbers and me. She was pleading with them not to kill me. Unfortunately for my wife, one of the robbers pulled the trigger firing her on her chest. They made away with our phones, laptops and cash sum of two thousand, two hundred naira (N2,200)”.

Vanguard learned that on the first of January at about 4am some dare devil armed robbers stormed the home of one Mr. Akin and held the man and his wife Modupe Catherine now late, hostage at gunpoint while their children attended crossover service.

Sequel to the sad event, operatives of the state anti robbery squad visited the scene and gathered items of evidential importance which were analysed leading to the arrest of one of the robbers.

During interrogation, he gave his name as Isah Shobayo and confessed committing the crime. He later led detectives to arrest one Ogundimu Olalekan who served as their armourer.

According to the Commissioner of police, Imohimi Edgal, it will be recalled that the robbers invaded their homes on new year day while their children were in the church for the cross over service.

Unfortunately, Modupe was shot as she stood between the robbers and her husband pleading with them not to kill him. They made away with their phones, laptops and cash sum.

Through painstaking investigation two members of a daredevil robbery gang that were involved in the murder Modupe Catherine in her home were arrested.

They were arrested by operatives of the state anti robbery squad after critical analysis of the crime scene.