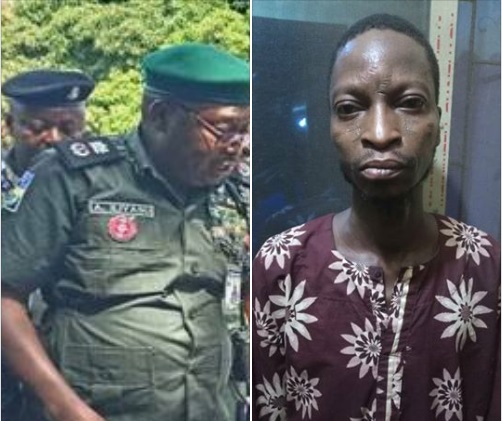 Owolabi has been arrested by the police

A 45-year-old man married with three wives has been apprehended after sleeping with his own biological daughter.

According to Vanguard, the suspect, Idowu Owolabi, 45, now in police custody, was arrested on Monday, January 28, 2019, following a complaint lodged at the Oja-Odan Police Division by the victim, alleging her father to have turned her into an instrument of s-x.

The victim, a 21-year-old girl (name withheld), narrated her ordeal to the police, saying her trauma began sometime in March, 2018 when she went with her randy father to a farm in Fagboun Village, where her father forcefully had carnal knowledge of her

According to her, the man had, ever since then, taken it as his prime domestic duty to sleep with her, adding that she would have long cried out but was afraid he might kill her, having severally warned her to keep it to herself or lose her life.

Speaking on the ugly incident, the State Police Public Relations Officer (PPRO), DSP Abimbola Oyeyemi said: “Upon the complaint, the DPO of Oja-Odan Police Division, CSP Olayemi Jacob, led his detectives to the suspect’s residence in Papa Olosun area of Oja-Odan where he was promptly arrested.

“On interrogation, the suspect who was said to had previously married to three different women, confessed to the commission of the crime but blamed it all on devil”, Oyeyemi stated, adding that, embittered by the incestuous act, the state Commissioner of Police, Cp Ahmed Iliyasu, had ordered the immediate transfer of the case to the State Criminal Investigation and Intelligence Department (SCIID), Abeokuta, for proper investigation and possible prosecution of the suspect.
Posted by Daniel Update at 10:06 AM