Notorious Killer Cultist Confesses After Being Arrested In Lagos (Photo) 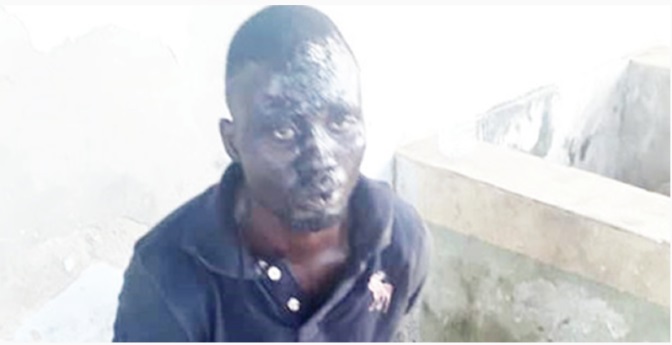 The Lagos State Police Command says it has arrested a suspected cultist, Elijah Ogunlaja, who allegedly confessed to killing three people in the state.

The police also said Ogunlaja, who with other cult members had allegedly been terrorising the Oworonshoki area of the state, had mobilised his gang members to kill a target on Wednesday, January 9, 2019, when he was arrested.

The state Police Public Relations Officer, CSP Chike Oti, said in a statement on Monday that Ogunlaja had been involved in series of cult clashes, adding that a distress call received during a cult clash led to his arrest in the Ososa area of Oworonshoki.

He added that during interrogation, the suspect confessed to killing one Yusuf, 22; Seun Balogun, 39; and one Aro, 25.

Oti stated, “Following a distress call received on Sunday, December 9, 2018, around noon that the two rival cult groups in Oworonshoki, Aiye and Eiye were fighting, the Divisional Police Officer in charge of the division quickly mobilised police officers to the scene and gave the cultists a hot chase. During the chase, one of the cultists, Elijah Ogunlaja, also known as Akeju, dropped his gun and took to his heels.


“Aside from the mastermind of the crisis, one Abiola and his accomplice, Rilwan, were also arrested and transferred to the Special Anti-Robbery Squad, Ikeja. The suspect, Abiola, is not only a notorious cultist, but also an Internet fraudster, who has been intimidating people and terrorising the whole community. Hence, the residents were happy about his arrest.


“Meanwhile, on Wednesday, January 9, 2019, around 7.30pm, Ogunlaja was arrested when he and his gang members came out to kill as usual. The arrested suspect had been deeply involved in several killings, robberies and other cult-related activities in Oworonshoki and made a confessional statement regarding the people he killed and how he bought his guns. The command’s operatives are still on the trail of the other fleeing gang members.

The PPRO added that the suspects had been charged to court and their case files duplicated and forwarded to the state Director of Public Prosecutions for legal advice.
Posted by Daniel Update at 7:38 AM