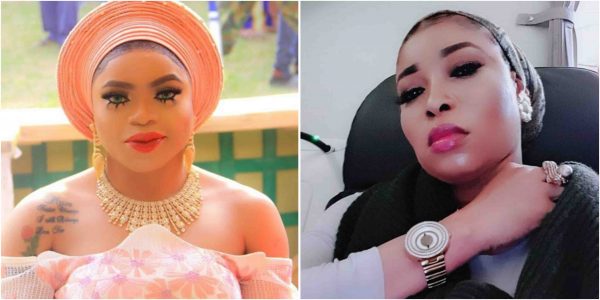 Nollywood actress Lizzy Anjorin has come out to defend Bobrisky and asked people to only judge him when they catch him with a man. The actress who took to her social media timeline to praise the popular cross-dresser wrote that it was until when she met with him that she understood the good nature he possesses and he should rather be left alone to focus on his business.


Until you were caught with your fellow man …Then I will deny you here and the afterlife. But if it your crazy styles to sell your product, I stand by you ..To dissociate from poverty is not rice and beans
..Ask yourself before you condemn him ..did he rape? rob? Steal? Steal panties?

Steal government money ?? … No ..I expect your former house help that betray you to show us and tell names of men that slept with you …but no evidence and still people just pick on him becos of his mode of dressing.

little mind with gene of poverty talk trash and think dirty ..great mind with successful gene mind their business cos they want to be successful..i learnt something about you…when you walked in alot of people were laughing and making jest of you.

but I asked myself what is going through this guy mind ..later you stood up with your maccorooni style you shared over 300 big milos for people ..after few minutes everybody change their thought towards you.

The lesson learnt is that never see anybody useless regardless of how they appear..some people will look cool but deadly than death ..upgrade your brain great mind , mind their business because people you think are normal might not be useful.

They might be the one cutting you down behind you ..Those you think are useless might be apple of God eyes ..who am I to judge ?? You will be surprised in 2020 when he declared his family then you will realise he is just an innocent entertainer and clown of highest order ..Bob thank you for coming.

Posted by Daniel Update at 9:21 AM