"Thank God" - FB User, Eboh Cubanna Grateful For Surviving After Being Hit By A Speeding Vehicle 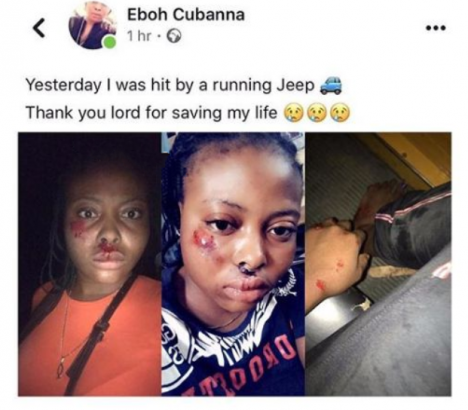 A Nigerian lady took to Facebook to disclose how grateful she was, after surviving being hit by a speeding vehicle. The Nigerian lady who shared photos of injuries she sustained from the accident, wrote;

Yesterday I was hit by a running jeep, thank you Lord for saving my life

This is coming after a Nigerian man narrated how his wife survived an accident, after being hit by a car. Onoriode Kevin Akpe wrote;


“And I will give MY angels charge over you so you would not dash your foot against a stone… “And so the almighty God preserved the life of my wife this morning as a fast-moving car hit her car from behind as she was driving to work on the airport road Abuja …….and the hosts of angels carried the car over the huge gutter to the other side while the other car somersaulted into the gutter. We thank God no life was lost but a few injuries here and there. Only God can do this.. TO YOU ALONE WE GIVE THE PRAISE!”

There was also a report of four persons reportedly killed along Polo Club and Mandela Car Wash at Government Reservation Area (GRA) in Port Harcourt, the Rivers State capital. It was gathered that the driver of a private car had hit and killed someone along Polo Club and fearing arrest and possible lynching by angry residents, he moved on with uncontrollable speed to escape, but at a T- Junction by the Mandela Car Wash, he collided with two other vehicles, pulling down walls and resulting in the death of one occupant of the vehicle, a mad man around the area and himself.
Posted by Daniel Update at 10:49 AM