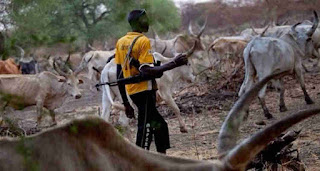 DAILY POST gathered that the attackers, armed with dangerous weapons, stormed the village, Monday evening and started shooting sporadically into the air.

Guma is the county home of the state governor, Samuel Ortom.

The development forced many residents to desert their homes.

A resident of the community told our reporter that the suspected herdsmen, after killing the two victims, set ablaze some houses in the community before returning to their base.
More to follow.
Posted by Daniel Update at 10:00 AM