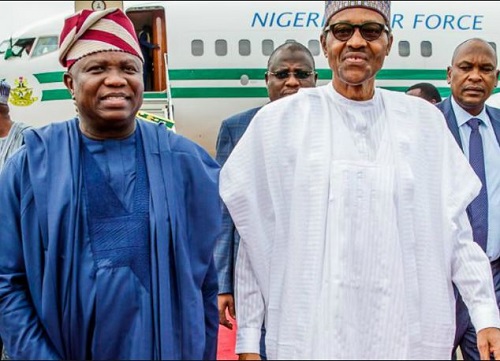 The Lagos State Government has announced it would restrict traffic in 18 major roads across the state following President Muhammadu Buhari’s mega-rally at the Teslim Balogun Stadium, Surulere, Lagos on Saturday.

Mr Buhari is expected to attend the All Progressives Congress rally for his re-election bid.

He said traffic would be diverted in some routes so that motorists and commuters are not left stranded during the event.

He said the committee had issued a traffic advisory to Lagosians to make their journey smooth. He warned motorists to stay away from Surulere, venue of the mega rally as many routes would be closed.

Vehicles diverted to Adeniran Ogunsanya Street or Akerele Extension and traffic from Barracks to Stadium on Funsho Williams Avenue would be diverted to Stadium Bridge on the main carriageway to Alaka.

On the traffic advisory, Mr Seriki said from Eko Bridge to Surulere, ”motorists should pass through Costain to Abebe, (Nigeria Breweries) to Eric Moore to Bode Thomas to destination (for instance, Adeniran Ogunsanya, Shitta Round About or Census to Adelabu to Masha/Ogunlana Drive) or Costain to Iponri Estate to Bode Thomas to Adeniran Ogunsanya and continue with their journey or Eko Bridge to Alaka to Stadium Bridge to Ojuelegba through Barracks on Funsho Williams Avenue to Lawanson Itire Road and connect destination through: Ishaga, Randle Avenue, Ekololu, Falolu and Ogunlana Drive to Akerele Extension”.

Also motorists from Ikorodu Road to Surulere, according to Mr Seriki, will pass through: ”Fadeyi Dorman-Long Bridge to Ojuelegba to Lawanson Itire Road to Ishaga, Randle Avenue, Ekololu, Falolu or Ogunlana Drive to Akerele Extension; connect Alaka to destination through Stadium Bridge to Alaka to Bode Thomas or connect Costain to Abebe Village (Nigerian Breweries) to Eric Moore to Bode Thomas to other destination (for instance, Adeniran Ogunsanya, Shitta Round About or Census to Adelabu to Masha/Ogunlana Drive)”.

From Surulere to Lagos, the chairman said motorists are advised ”to follow Adeniran Ogunsanya, Shitta Roundabout or Census to Adelabu to Masha/Ogunlana Drive) to Bode Thomas to Eric Moore to Abebe (Nigeria Breweries) to Costain; Adeniran Ogunsanya to Bode Thomas to Iponri Estate to Costain or pass through Ishaga, Randle Avenue, Ekololu, Falolu or Ogunlana Drive to Lawanson Itire Road to Ojuelegba to Barracks on Funsho Williams Avenue to Stadium Bridge to Eko Bridge”.

“We plead for the understanding of the situation by members of the public and urge that we all come to the venue to receive the President Muhammadu Buhari to our dear State,” he said.

Mr Seriki said over 100,000 APC supporters would gather at the Teslim Balogun Stadium to receive the president.

He said Lagos was ready to deliver two million votes for Mr Buhari’s re-election.
Posted by Daniel Update at 6:55 AM