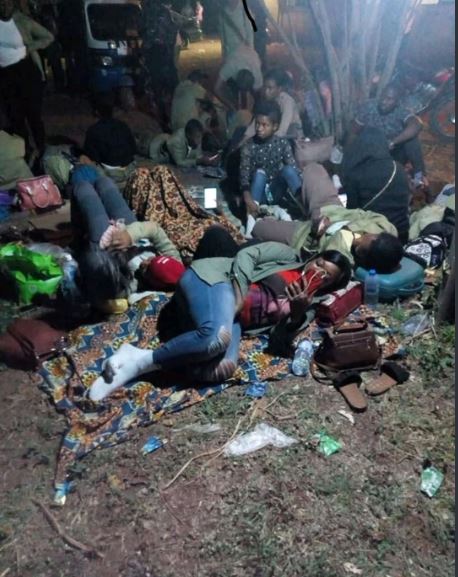 Some of the corpers who were forced to sleep outside

The corps said INEC gave the assurance at a meeting with the management of NYSC over the harsh experience of corps members recruited as ad-hoc staff for the botched February 16 polls.

NYSC said INEC gave full assurances on the adequate arrangement for transport, accommodation, security, especially at the Registration Area Centres (RACs) throughout the period of the elections.

The presidential and National Assembly elections have been rescheduled to Saturday while the state elections will also hold a week later on March 9.

Premium Times earlier reported how the corps members were exposed to risks and the elements on Friday as they prepared for the elections.

Irate corps members also protested the nonpayment of their allowances by INEC.

Speaking in a statement through the Director, Press and Public Relations, Adenike Adeyemi, Monday night, NYSC said those incidents were adduced to the logistic challenges INEC experienced.

“The attention of NYSC Management has been drawn to uninspiring pictures and tales of woes experienced by many corps members assigned to INEC duties in several States across the country on the eve of the postponed general elections. These have been confirmed as authentic situation reports and have since been brought to the attention of the INEC Management,” Mrs Adeyemi said.

She said NYSC noted the unpleasant occurrences were totally at variance with the spirit of the MoU the NYSC signed with INEC.

“The Management wishes to use this medium to give further assurances to the corps members and the general public that the safety, welfare and remuneration shall be provided by INEC as agreed and in accordance with the spirit of the MoU,” she said.

She said INEC has assured the NYSC management that it has commenced payment of training and feeding allowances to corps members nationwide, as well as the election duty allowances.

The National Youth Service Corps is a scheme set up by the Nigerian government to involve Nigerian graduates in nation-building and the development of the country.

INEC often reaches out to the NYSC for the use of its corps members as ad-hoc staff for elections.
Posted by Daniel Update at 7:00 AM