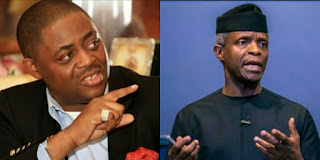 Femi Fani-Kayode, FFK, has reacted to the shutting out of Vice President Yemi Osinbajo from meeting President Buhari held with Northern governors and Service Chiefs
VP Yemi Osinbajo was quoted as saying:


‘I Wasn’t informed of the meeting, when I heard of it, I was refused entrance. Yet, Governors were allowed to attend.

Reacting to the vice president’s statement, Femi Fani-Kayode stated that he was treated that way because he chose to be a slave.

FFK shared the quote from Yemi Osinbajo and added his own caption on Twitter:

“That is what happens to useful idiots and accursed slaves. If Buhari were to crouch over ur face and defecate in ur mouth, you would still support him.”