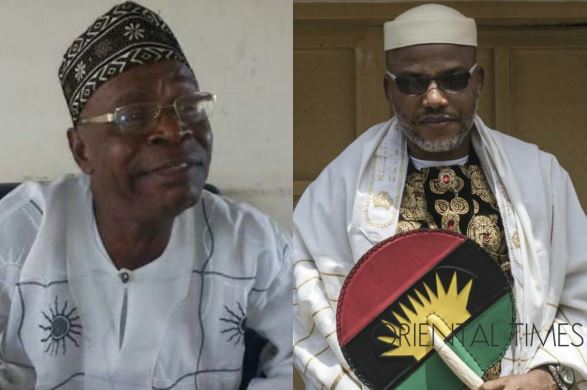 An Enugu-based Prophet, Anthony Nwoko, has claimed that the leader of the Indigenous People of Biafra, IPOB, Mazi Nnamdi Kanu collected money from Alhaji Atiku Abubakar of the Peoples Democratic Party, PDP, on the eve of the presidential election.

Recall that Kanu, who was propagating election boycott message changed his stand few days to the election, after he announced that an unnamed document had been signed.

Prophet Nwoko has now come out to say that the IPOB leader received cash from Atiku, the PDP presidential candidate, to call off the boycott.

Addressing a press conference in Enugu on Tuesday, Nwoko also came hard on leaders of IPOB, MASSOB, BIM and other pro-Biafran agitators, saying that they do not have the mandate of God to lead the struggle for the real freedom of the people.

Source: Oriental Times
Posted by Daniel Update at 8:56 AM