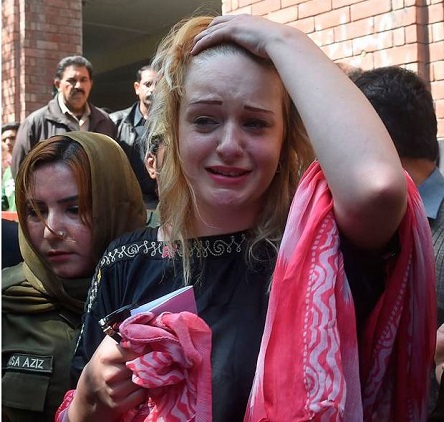 A Czech model has been sentenced to eight years and eight months in prison in Pakistan on charges of drug trafficking.

Tereza Hluskova, 22, was sentenced at a court in the eastern city of Lahore, the capital of Punjab province.

According to the court, Hluskova was arrested in possession of 8.5kg (19lbs) of heroin in January 2018 at the Lahore airport from where she was heading to Ireland via Dubai, the United Arab Emirates.

Since her arrest, Hluskova has told investigators that she came to Pakistan to work as a model but that someone put narcotics into her luggage.

Her lawyer Sardar Asghar Dogar said she will appeal.

Hluskova was convicted during a court appearance last week.

The story first gained attention when Miss Hluskova was captured smiling and posing for photos with Pakistani investigators after she was arrested at the airport.

She has previously said she was in Pakistan for a modelling contract and told authorities she did not know how the heroin ended up in her suitcase.

In a video, released online, a Pakistani customs official is shown 'discovering' the drugs hidden in the suitcase while Miss Hluskova looks on. She then puts her head in her hands.

Two other men were also arrested and were due to face drug trafficking charges after police went through the model's phone.
Posted by Daniel Update at 3:57 AM