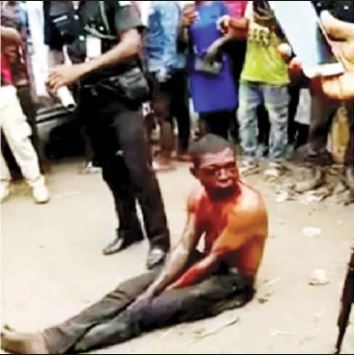 Punch Metro reports that policemen have rescued a suspected car thief, Yakubu Mohammed, from being lynched by a mob in Nyanya, a satellite town in the Federal Capital Territory.

The 40-year-old, who was caught while attempting to steal a car on Saturday, was beaten to an inch of his life before police officers from Nyanya Police Station arrived at the scene and rescued him from the mob.

It was learnt that Mohammed was notorious for stealing cars using ‘master keys’ which were found in his possession.

The acting police spokesman, FCT Command, Gajere Danjuma, confirmed the arrest of the suspect, adding that a Toyota car key and other keys were recovered from him.


“Mohammed, who lives in Ankpa, Kogi State, was in Abuja to visit his sister when he was caught attempting to steal a vehicle.


“The people, who apprehended him, mobbed him, but he was rescued by our men from Nyanya Police Station. The case is under investigation,” he said.
Posted by Daniel Update at 3:11 PM