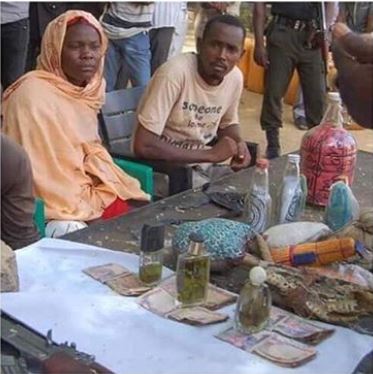 
A 30-year-old fake herbalist has been arrested by the Katsina State police command for deceitfully collecting the sum of N1,992,000 from one Rabi’u Haruna, 30, with the intent to provide him with spiritual powers.

Hassatu Isah was arrested on April 12, 2019. Nemesis caught up with her when she could not deliver the spiritual powers to the victim and he demanded the return of his money.

She then planned to kill him by hiring a specialized hired killer, one Babangida Dalha, whom she contracted with the sum of N50,000.

In the course of investigation, suspects were arrested and confessed to have administered poison with intent to kill the victim, but failed. They eventually resorted to physical killing before they were arrested.
Posted by Daniel Update at 3:00 PM