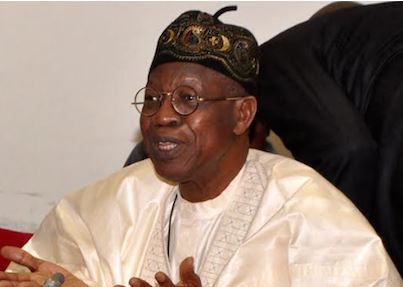 
According to a report by Vanguard, the Minister of Information and Culture, Alhaji Lai Mohammed, on Friday condoled with Dr Hezekiah Oyedepo over the death of his wife and General Manager of the National Theatre, Dr Stella Oyedepo.

The minister had led top management officials of the ministry to the family house of the Oyedepos in Ilorin to condole with the family.

Reports have it that the Permanent Secretary in the ministry, Ms Grace Gekpe, as well as Directors and Special Advisers to the minister were in the delegation.

The minister described the death of the National Theatre boss as “sad and shocking, ” adding that the entire ministry had lost a great administrator in her. He said the deceased was a great enthusiast of culture who left good footprints on the sands of time and beyond the shores of Nigeria.

“I am here with the top management of the ministry to condole with you on the tragic and sad loss of one of the CEOs of one of our parastatals, the National Theatre,

“The late Dr Stella Oyedepo was a colleague, a friend, a woman who had infected us with her enthusiasm about positive attitude about life.

“We were all shocked when we heard the news of her death, but we must accept that God has destined it to happen,” he said.

The minister said that the deceased left very big imprints in the national eco system of the creative industry.

“In the one year she spent as the CEO of the National Theatre, we will continue to remember her enthusiasm, passion and resolute decision to move the establishment to greater heights.

“When the Chairman of the Senate Committee on Culture, Sen. Fatima Raji-Rasaki, called me yesterday, it was the infectious and passionate nature of Dr Oyedepo that struck her most,” he said.

The husband, in a brief remark, described his late wife as an “irreplaceable partner” whose death left indelible memories in him and the family. He thanked the minister, management and members of staff of the ministry for the condolence visit.

Reports have it that when the delegation was offering prayers for the family, Dr David Oyedepo, the Founder and Presiding Bishop of Living Faith Church Worldwide, came in. The clergy man, who is a cousin of the deceased’s husband, joined in the prayer session and offered special prayers for all.

The late Oyedepo, who died in an accident on Easter Monday on her way to Lagos, was appointed as National Theatre’s General Manager in April 2018. She was a foremost Nigerian playwright who had written over 300 plays over the course of her career, with 30 published.

The 65-year-old playwright was also an ex-director of the Kwara State Council for Arts and Culture.
Posted by Daniel Update at 2:08 PM