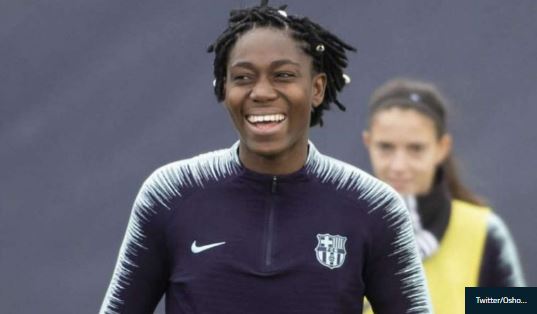 Barcelona have exercised the option to sign Nigeria striker Asisat Oshoala on a permanent deal from Dalian Quanjian.

The 24-year-old initially joined Barca on a six-month loan deal in January following the postponement of 2019 Chinese Women's Super League. She went on to establish herself in the team with eight goals after 11 games in all competitions.

The Nigeria international was in fine form for Llius Cortes' side in the Liga Iberdrola and Uefa Champions League with her attacking prowess.
Her impressive performances convinced the club to hand her a two-year contract that will keep her in Catalonia until June 2022.

Oshoala was part of Barcelona's fairytale run to the Uefa Women's Champions League final and scored the consolation goal in their 4-1 loss to Lyon in Budapest.

Her Champions League final appearance and goal saw her made history in the elite European competition.

"Asisat Oshoala and FC Barcelona have linked a new contract until June 30, 2022, after the agreement for transfer from the club on the 1st of July between Dalian Quanjian and Dalian club," the club announced on its website.

"The Nigerian forward, 24, arrived at Barca on January 31 as a transfer from the Chinese entity. In these four months, Oshoala has played eleven official games as a coach and scored eight goals, including the first team in a Champions League final in Budapest.

"The three-time best African soccer player of the year is currently concentrated with the Nigerian national team before playing the World Cup in France, starting June 7. When the calendar so permits, the act of signing of the new Oshoala contract with Barca will take place."

Before reuniting with her Barca teammates later this year, Oshoala will be aiming to help Nigeria to 2019 Women's World Cup glory in France this summer.
Posted by Daniel Update at 5:02 PM