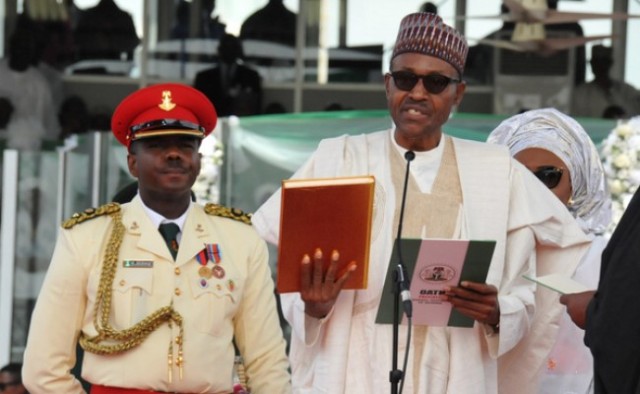 Buhari at his swearing-in


President Muhammadu Buhari has set a new record by being the first democratically elected leader in the history of Nigeria not to deliver an inaugural speech, Punch Metro reports.

The President and his deputy, Vice-President Yemi Osinbajo, both took the oath of office between 10 and 11am on Wednesday, May 29, 2019.

The norm since the inauguration of the late Prime Minister, Sir. Abubakar Tafawa-Balewa, has been for democratically elected leaders to address Nigerians and inform the nation of their plans and offer words of assurances to the people.

Tafawa-Balewa delivered the first of such speeches on October 1, 1960 after the union jack had been lowered.

In the speech, he praised the resilience of Nigerians during the over 60 years of colonialism and also thanked foreign countries for supporting the nation in its drive for independence.

In the first speech, Shagari called on all politicians, regardless of party affiliation, to unite to make Nigeria one and to also ensure that military rule never returned.

In his second inaugural speech in 1983, Shagari said the past four years had brought Nigeria peace and stability. The task for the new administration, he said, ”will no more involve the erection of a system but rather to ensure efficient working of that system.”

He was removed in a coup by Gen. Muhammadu Buhari less than three months thereby marking the end of the Second Republic.

In the Fourth Republic, Olusegun Obasanjo, in his own inaugural speech on May 29, 1999, vowed that there would be no sacred cows in his government and he would fight corruption to the best of his ability.

In his second inauguration in 2003, Obasanjo thanked his deputy, Vice-President Atiku Abubakar, and members of his cabinet for the successes he had recorded especially in the area of economy and improving the standard of living of Nigerians.

In Umaru Yar’Adua’s speech delivered on May 29, 2007, the President admitted that the election which ushered in his administration was flawed and promised to focus on electoral reform.

Upon Yar’Adua’s death in 2010, his deputy, Goodluck Jonathan, was sworn in on May 6, 2010, and in his speech, he promised to continue with Yar’Adua’s agenda especially in the area of electoral reform and fighting corruption.

The following year, Jonathan was inaugurated for a fresh term of four years on May 29, 2011.

In the speech, the President thanked Nigerians for making history by voting in a person from a minority tribe as President.

In his own inaugural speech on May 29, 2015, Buhari, who made history as the first opposition politician to be voted into power, delivered the memorable speech, ‘I belong to everybody and I belong to nobody’.

However, upon his swearing-in on May 29, 2019, Buhari merely took the oaths of office and allegiance, inspected the guards’ brigade, jumped into his convoy and left.
Posted by Daniel Update at 2:04 PM