Drama As Ekiti Nullifies Employment Of 2,000 Workers Appointed By Fayose, Reabsorbs Others 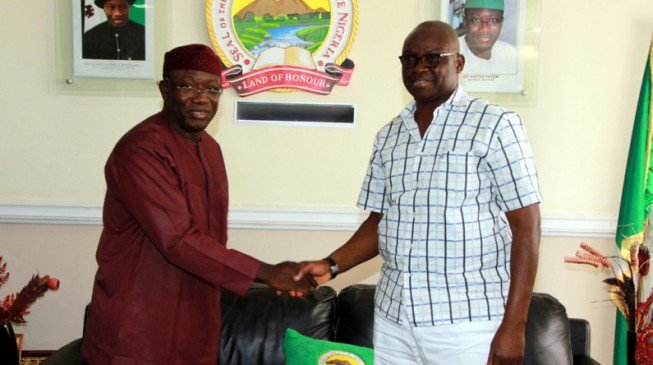 
According to Punch Metro, the Ekiti State Government has declared as null and void, the appointment of over 2000 workers employed into the state workforce by former Governor Ayodele Fayose after the July 2018 Ekiti Governorship Election.

Commissioner for Information, Muyiwa Olumilua, who said the state government decision which sacked the workers followed submission of the Report of the Committee set up by the state government to review the irregular appointments made into the Public Service between 2014 and 2018.

The over 2000 workers were employed after Fayose’s Peoples Democratic Party lost the governorship election to the All Progressives Congress.

Olumilua, who addressed journalists on Thursday on the outcome of Wednesday’s State Executive Council meeting, said the affected workers, who had been warned earlier against participation in Fayose’s last minute appointment exercise, could participate in the next recruitment.

He said that the governor, Dr Kayode Fayemi, had directed the Head of Service, Ayodeji Ajayi, “to collate all available vacancies in the civil service, with the overhead implications to enable the state government to prepare to recruit suitable and qualified Ekiti citizens into the public service, irrespective of the party affiliations”.

Olumilua, who reeled out reprieve for some workers, said officers dismissed during Fayose’s tenure in ministries of Justice; Environment; and Works; State Internal Revenue; Hospital Management Board; Teaching Service Commission; and SUBEB should go to the Office of Establishment to ascertain their current status.

He added, “The 169 officers recruited in 2014 but had their appointments terminated by the Fayose administration shall be considered for reabsorption by the House of Assembly Service Commission but on a case-by-case basis.


“The officers reinstated into the Local Government Service Commission between October 16th 2014, and October 15th 2018, are to be reabsorbed by the relevant personnel boards and migrated to biometric payroll with immediate effect.


“All 272 officers employed by the Fayose administration, who are still on manual payroll, shall be considered for absorption into the civil service but on case-by-case basis,” he said.

The Chairman, Trade Union Congress, Sola Adigun, who said the labour union would meet the Head of Service on clarification on this issue, added “We will hold Fayemi by his words. He had said there would be no vendetta or victimization.

But Fayose, who said Fayemi administration’s decision to sack the workers was wickedness and political vendetta promoted to the peak, urged victims of the action “to place their hope in God and enforce their rights to seek redress in the court of law.”

Fayose’s spokesperson, Lere Olayinka, said in a statement that “Fayemi had only succeeded in writing his name in the history books of Ekiti as one who inflicts pains and sorrow on the people”.

He said, “Fayemi has only demonstrated the wickedness in his heart by sacking Ekiti sons and daughters who were duly employed by the state government. It will be on record that the PDP government of Fayose gave jobs to over 2,000 unemployed youths in Ekiti while the APC government of Fayemi sacked them”.
Posted by Daniel Update at 12:09 PM