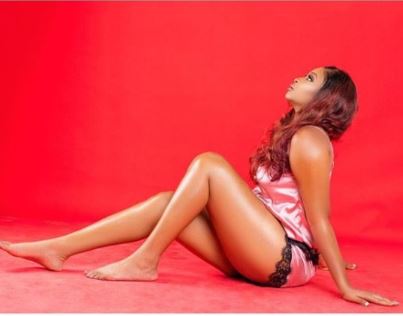 Etinosa who threw shades as she sat on a red cloth for a promotional shoot, stated that she is not Olakunle Churchill, Tonto Dikeh's ex-husband who the actress claimed she caught tying a red cloth while allegedly performing 'yahoo' rituals.

Recall that the actress who spoke in video she shared on her YouTube page said;

“I’ll like to clear up all the lies, all the allegations, and everything once and for all. I feel terrible, I feel used. I am the bigest scam that Churchill Olakunle Oladunni has ever played in his life. Now, fraud, 419, Yahoo, You know, you go online, you dupe white women, you go online, you dupe people. that’s what my son’s father does. I’m not proud of it, I told you, I say this interview, it’s mainly not for Nigerians.I want my son to grow up, I’m not the kind of mother tht’s going to hide things from her son. No. My son will know everything and the whole truth. So, yes. My son’s father is a fraud. He does Yahoo. How I know, because I caught him in the middle of a red candle, with laptop in his lap and a red clothe tied around his waist.”

Etinosa who took the above claim as a 'punchline' in response to a fan's question as she sat on a red cloth, stated that she is not Mr Churchill.

Here is a screenshot of the exchange below; 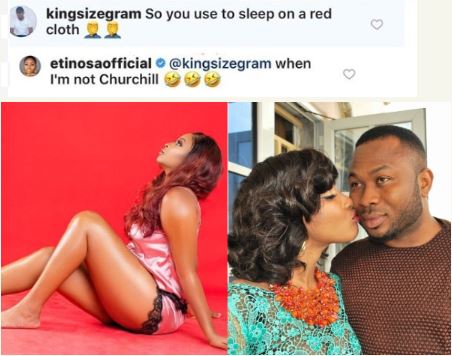 Posted by Daniel Update at 5:38 AM