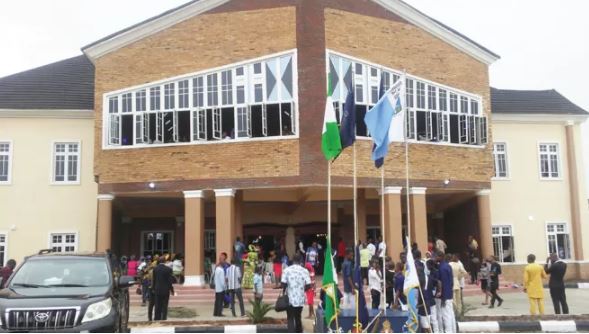 The multi- million naira St Christopher’s Anglican Church, Onitsha, built inside the old cemetery, was dedicated recently. Like other early churches, St Christopher is located in a site referred to as evil forest, where indigenes threw dead strangers before and after the advent of Christianity in the Niger.

Therefore, It was not a surprise that the celebration was with mixed feelings. At the dedication of the worship facility, the Bishop on the Niger, the Right Rev Dr. Owen Nwokolo, went down memory lane to trace the history of the church. According to the Bishop, “the new St. Christopher is the seat of the Evangelical Fellowship in the Anglican Communion EFAC headquarters in Nigeria.”

In his chronicle, he referred to the contribution of each priest of the church, which according him is the oldest Anglican Church in South East Nigeria. He particularly praised the evangelical work of Ven. Chidi Nwadike .The bishop said his visionary and evangelical mindset coupled with his selflessness ensured that the congregants of St Christopher did not only adhere to the Great Commission mandate, but generous in their giving, as well.

“As a 21st century pastor Ven. Chidi Nwadike’s arrival heralded a new season for the church as he embarked on the spiritual war in the land of the dead known as old cemetery in Onitsha today.


“He understood the essence of worshiping God in a magnificent edifice; hence his first vision was how to acquire a land for the new church building project”. So as one who led by example, he gave a large chunk of his annual stipends to ensure that the church acquired the site which had always been the property of the church, but a burial ground for many early Missionaries. The church only sought to reclaim it, but it is worthy to note that the acquisition of the site was a herculean task”.

However the European benevolence and their attendant passion for lost souls brought them to the Niger River bank in 1857 for missionary expedition. Hence the history of St Christopher’s Church Odoakpu, Onitsha was to some extent as old as the coming of Christianity in Igbo land.” The foundation of the church was laid in 2013 after several spiritual, and man- made battles.

The most prominent of the crisis was recorded in 2011, when an erected four story building collapsed killing two builders on the site. Also, it would be recalled that the office complex of the four- story building was almost 90% completed, when it collapsed one faithful Monday morning killing two persons on the spot. The testimony as recorded by the church was that it did not collapse on a Sunday when many faithful were in some of the rooms holding one meeting or the other.

Among other issues were the Spiritual battles. Just like every other church, St Christopher Church had their foundation laid among the living and the dead as a cemetery. History also has it that the land belonged to three villages of Obi Kpolo, Ogbosi and Mgelekeke.

The land was however in contention for so many reasons. Sunday Telegraph gathered that the Catholic Church and the Church Missionary Society (CMS), laid several claims to being the original owner of the burial ground until the matter was eventually settled. The people of Onitsha also laid claim to the ownership of the land.

The Vicar of the Church, Canon Chibueze Abone, in an interview narrated his experience. He said: “We passed through Spiritual challenges during the foundation but thank God the will of God prevailed at the end. Furthermore, he spoke of his determination to carry evangelism to the frontiers, no matter the odds vowing that he is prepared to wage the battle between the dead spirit and the living as far as he remains a minister the gospel of Christ.

However it was jubilation galore as the Bishop on the Niger, His Lordship, the RT Rev’d Dr Onwen Nwokolo and the wife led the procession to consecrate the new altar of St Christopher, now nick named “Living Church Onitsha”. Earlier in his sermon the Bishop noted that the only legacy one could leave behind is to invest in the things of God. He said all things will pass away but the teachings of Christ endure forever. He cautioned the Anglican faithful on the need to use their God given wealth to spread the Gospel, no matter the situation they may find themselves. Touching a bit on the insecurity in the country, the Bishop said the only option left for the Christians was to pray without ceasing. “We will not encourage carrying of illegal arms but one thing is clear, anything that has a beginning must have an end one day.

However the country is drifting to near anarchy if the killings in Nigeria continue unabated. Governor Willie Obiano of Anambra State, during the ceremony on behalf of the state announced a donation of N250, 000, as a token. Governor Obiano was represented at the occasion by one of his aides who did not want her name mentioned. According to her the governor was outside the country on official assignment and therefore was unavoidably absent. However, some worshipers expressed concern that with the dedication of the church the battle line has been drawn between the living and the dead in the cemetery, the worshippers in the New Living Church. It would be a battle to finish or lost forever.