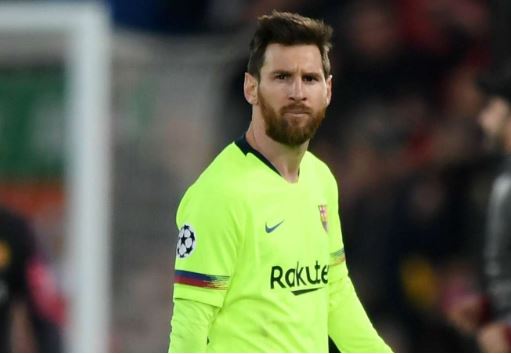 Lionel Messi should be assigned as much blame for Barcelona’s failures as he is praised for their success, according to Brazil legend Ronaldo.

The Argentine was near his brilliant best in the first leg of the Champions League semi-final against Liverpool, scoring two goals, including an exquisite free-kick from distance to help his side to a 3-0 advantage at Camp Nou.

But Barca’s dream start finished in a nightmare as Liverpool struck back at Anfield for a 4-0 victory thanks to doubles from Divock Origi and Georginio Wijnaldum to oust the Liga champions.

Messi was among the litany of Barca players who struggled in the defeat, with the star man unable to reach the heights he had in the first leg or throughout the course of the season.

It was the second straight campaign the Catalan club was knocked out of the Champions League after squandering a three-goal first leg advantage, and head coach Ernesto Valverde’s position has come under scrutiny.

In addition, players like Philippe Coutinho have been blamed for the performance, but debate surrounds Messi’s culpability in the defeat.

And former Barca and Real Madrid forward Ronaldo believes that if Messi is given the lionshare of the credit when Barca triumph, then he must share with team-mates and coaches in the failure.

"It is unfair to point the culprits to a defeat,” Ronaldo said at a Santander event. “I see that Barcelona has a great team and has the best player in the world, which is Messi.


“The other day I read that other players lost and Barca wins [because of] Messi. It is a tremendous injustice to all the players and the coaching staff.


“Barcelona is a great team with great players and very good coaches. You should be a little more careful with criticism.”

Asked about the result of the tie itself, Ronaldo believes Liverpool’s performance was worthy of advancing, and thinks even Barca’s mistake on the tie-clinching goal by Origi would not have saved them from eventual elimination at Anfield.

“[Liverpool] had more motivation, intensity and desire,” Ronaldo added. “In the first part, Barcelona had chances to score a goal that would have changed everything. But Liverpool deserved it. They have shown strength and emotional intelligence.

“In the fourth goal there was a mistake, but I think that if it had not [been scored], it would have arrived in a different way. They played the game of their lives.


“It's a shame for Barcelona, because they played a great game in the first leg, we all enjoyed Messi.


“It's a pity that there is not a Spaniard in the final, but Liverpool deserved it more."
Posted by Daniel Update at 1:54 PM