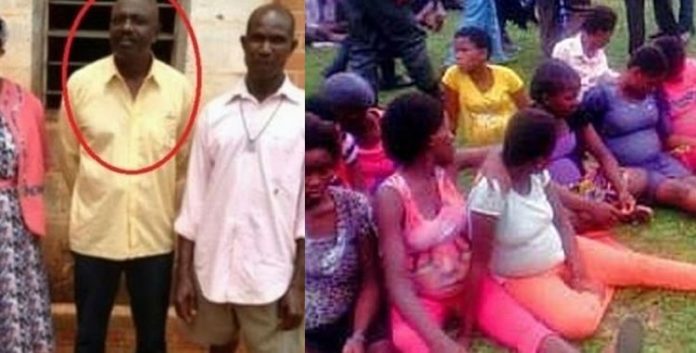 Ngwu after he was arrested


Officers of the Enugu State Police Command has arrested a pastor for impregnating twenty members of his ministry.

The 53-year-old General Overseer of Vineyard Ministry of the Holy Trinity, Enugu has been identified as Timothy Ngwu.

The pastor was reported to have claimed that the Holy Spirit had commanded him to impregnate as many female members of the church as possible.

Enugu police spokesperson, Ebere Amaraizu stated, however, that the pastor had been charged for sexual abuse.

Sources close to the pastor’s ministry told INDEPENDENT ONLINE that the pastor claims to be obeying a spiritual order to do the will of God, by impregnating anyone chosen and revealed by the Holy Spirit, irrespective of the woman’s marital status.

Our source further informed that whenever a woman impregnated by the pastor is delivered of a baby, the child is supposed to remain in the ministry with the mother for life.

Our investigation further revealed that the pastor was reported at the police by his own wife who got tired of his randy ventures in the name of even after he had also impregnated her young niece all in the name of obeying a ‘divine instruction’.

In his defense, the pastor stated, however, that he never had sex with any of the married women unless their husbands concurred to the request of the ‘Holy Ghost’.

Meanwhile, he has been quoted to have said that he has only five wives with 13 children along with other concubines he got after the ‘Holy Spirit commanded’ him to do so.

Culled from DailyIndependent
Posted by Daniel Update at 4:56 PM