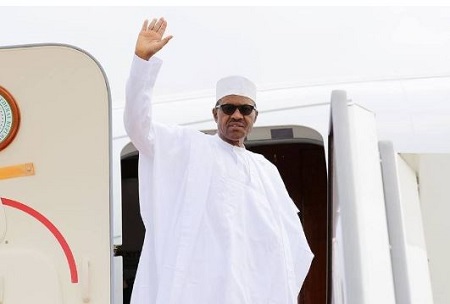 The News Agency of Nigeria (NAN) reports that the presidential aircraft conveying the president and members of his entourage took-off from the airport at about 11.00 a.m.

Those at the airport to bid the president farewell included his Chief of Staff, Abba Kyari; Minister of the Federal Capital Territory (FCT), Mohammed Bello; acting Inspector General of Police, Muhammed Adamu, and other government officials.

NAN reports that the president’s trip to the Holy Land followed the invitation by King Salman Bin Abdulaziz, the king of Saudi Arabia and Custodian of the Two Holy Mosques.

A statement earlier issued by the President’s Senior Special Assistant on Media and Publicity, Garba Shehu, in Abuja on Wednesday confirmed that President Buhari would perform the Umrah (lesser pilgrimage) while in the Kingdom.

Umrah is an optional but recommended pilgrimage to Makkah that can be made at any time of the year.