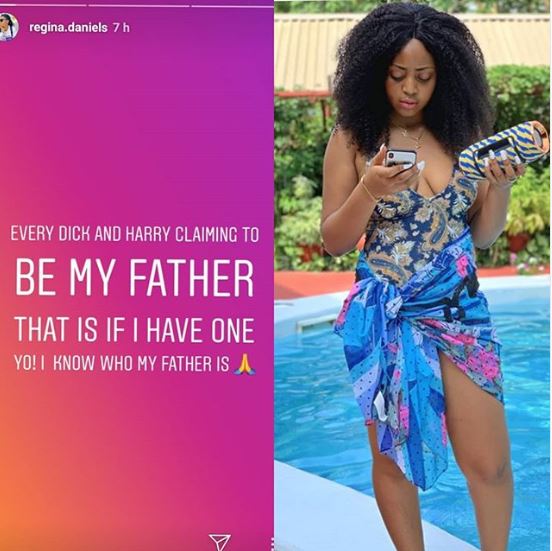 Regina Daniels has reacted to claims that her father wasn't informed about her marriage. In a cryptic message, she revealed that attempts have been made to impersonate her father but she knows who the real man is.

"Every Dick and Harry claiming to be my father that is if I have one. Yo! I know who my father is," she said on social media.

It would be recalled that a man claiming to be her father, Barr. Jude Ojeogwu has claimed ignorance of her moneyed marriage to one billionaire Ned Nwoko who is 62 years old.

In an exclusive chat with E-Daily, the actress’ father, Barrister Jude Ojeogwu revealed how Regina and her two brothers, deceived him into believing that there was no romance between her and Ned Nwoko.

“I invited Regina to my house where I live in Lagos; (I can’t disclose the location of my house right now for security reasons); she came to my house with her siblings (Lawrence and Samuel Ojeogwu) and I asked her if all I’ve been hearing is true because I wanted to know what was actually going on. She ‘Daddy, nothing is going on.’ I asked my first son, her brother, Lawrence Ojeogwu, the same question and he also said nothing was going on.

"I then asked my other son, Samuel, the same question, he too said the same thing, ‘Daddy nothing is going on’. I said okay, should we now say all that I’ve been hearing and seeing is more like a movie? And they said ‘Yes’. However, I advised that if she wants to get married to an old man, she (Regina) should not forget that very soon she (Regina) would become a widow. But that if she is getting married to a man like her age mate, of the cause, becoming a widow would be far from her (Regina).

"That was where we finished the discussion about her marriage. I went further to ask what was happening about her education because I used to visit her in her school, Igbinedion University. She said she has plans of travelling to Dubai for her studies. I asked her what was in Dubai if not Arabic; that she should be thinking of going to Havard or Oxford University”, he said.

He added that when videos of the actress’ initiation ceremony into ‘Otu Odu’ surfaced online and that of the traditional ceremony, he was forced to finally speak.”
Posted by Daniel Update at 4:51 PM