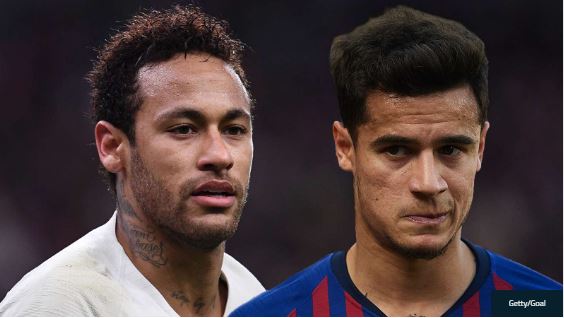 
Barcelona have tabled an offer of €100 million plus Philippe Coutinho in their bid to bring Neymar back to the club, reports Sport.

The Camp Nou giants are eager to re-sign the Brazil international from Paris Saint-Germain and are hoping that a deal involving a sizeable fee and a proven playmaker will be deemed acceptable.

In other news, Transfer fee alone could break his own world record

Neymar's elevated wage demands are the main obstacle between the Brazilian and a move back to Barcelona, according to Le 10 Sport.

Speculation concerning Neymar's future has heightened in recent days, amid reports that he is determined not to resume his Paris Saint-Germain career.

But aside from his transfer fee, that would be in the region of €200-300 million (£178-266m/$225-338m), although Ousmane Dembele could go the other way to offset the cost, his astronomic annual salary is beyond the Catalans' means.

Man Utd have rejected a loan offer for Alexis Sanchez from Palmeiras, according to Sport Witness.

The 30-year-old scored his first goal in five months in Chile's Copa America victory over Japan, and has been strongly linked with a move away from Old Trafford this summer.

Brazilian club Palmeiras had stated their interest in the player, but Man Utd immediately ruled out any possibility of the move.
Arsenal have been dealt a double blow in their attempt to bring in some fresh faces, as moves for both Yannick Carrasco and Ryan Fraser have stalled.

According to the Evening Standard, there have been no positive steps in bringing in either winger to the club this summer.
Posted by Daniel Update at 2:18 PM