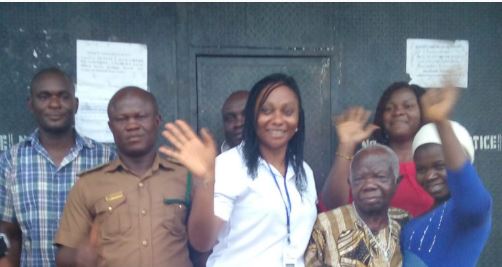 
Pa Celestine Egbohuche, Nigeria’s oldest prisoner, who was imprisoned at the Enugu Maximum Prison for over 19 years has finally been released.

According to Punch Metro, Pa Celestine was released on Thursday to his only surviving daughter, Miss Chisom Celestine through a non-governmental organisation, Global Society for Anti-corruption who had been pushing for his release from the Enugu Prison.

The centenarian, who hails from Amachara-Owerre, Akokwa in Ideato North Local Government Area of Imo State, was condemned to death along with his son, Paul and another relation, now 87.

Immediately after his release from prison custody amidst cheers and jubilations, Pa Celestine was rushed to St. Daniel’s Hospital, at No 7, Link Avenue, Independent, Enugu where he was admitted for a medical checkup to ensure that he was fit before going home.

Speaking to our correspondent, Regional Director, GSAC, Mrs Amaka Nweke praised God for granting Pa Celestine freedom at last, while calling on well-meaning Nigerians to come to the aid of the centenarian.

Mrs Nweke disclosed that the saddest news she organization received after the Imo State Government had granted him pardon was that his house was demolished shortly after he was imprisoned.

She said, “The Global Society for Anti-Corruption, on behalf of the President, Mr. Frank Ezeona, are here to thank God for what he has done today. We bless the name of the Lord for how far he has been with Pa Celestine and making this day a reality.


“Actually on the 5th of September, we petitioned the president of our dear country and past Governor of Imo state, Rochas Okorocha pleading for pardon for Pa Celestine.


“On Sunday, I got a call from the former Attorney General of Imo state that he has been granted pardon by the state government.


“So I went to the prison, met with the DCP and confirmed from him that they had gotten the message of his pardon. He said that they were processing the paper for his release and finally today, by the special grace of God, he was released.

His daughter, Chisom was elated at the release of her father.

She, however, called for the release of her only brother, Paul saying that he was innocent of the crime he was accused.