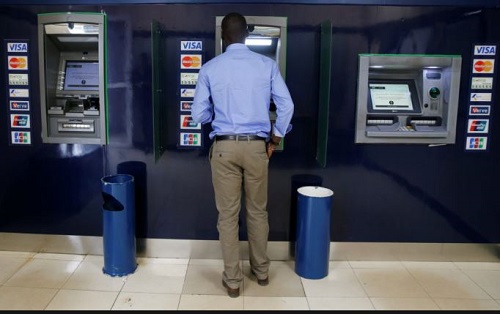 There was pandemonium in the early hours of Saturday as no fewer than four Automated Teller Machines owned by a new generation bank burst in flames and exploded destroying the machines.

The incident Vanguard gathered occurred at the an ATM gallery in front of University of Calabar, UNICAL, gate at about 9:00 am this morning.

Vanguard also learned that no customer was injured during the explosion but there was panic because the explosion causes trepidation amongst users and passers by near the University gate.

An eyewitness ,Mathew Ilem who spoke with Vanguard said the incident occurred barely 20 minutes that the bank officials loaded the machines with cash.

He said: ” It was not up to 20 minutes when the bank officials loaded the machines with cash before the fire started from inside and the machines started exploding.

” I had to call police and fire service who responded on time and they are trying to put out the fire ,the cause is not sure but its seems it’s an electrical fault

Vanguard gathered that policemen and fire fighters cordoned off the area and the fire service put out the fire .

Effort to speak with the bank officials proved abortive as they refused to make any comment on the incident .

More details soon
Posted by Daniel Update at 11:35 AM