This Could Be My Last AFCON - Mikel Obi 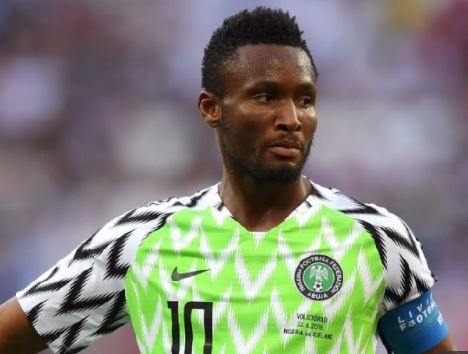 Nigeria captain John Obi Mikel has hinted that the 2019 Africa Cup of Nations (Afcon) could be his last continental outing with the country.

Mikel has been a regular fixture in the national team frame since he made his Super Eagles debut back in August 2005 during a friendly match against Libya.

The former Chelsea midfielder has been named in Gernot Rohr’s final 23-man squad for the tournament in Egypt and he is now set to play in his fourth Afcon after previous appearances in the 2006, 2008 and 2013 editions.

When quizzed about his international future, Mikel said that he is uncertain if he will be available for selection for their 2021 edition in Cameroon.

“I do not know but I think it may be (my last Afcon). I like to go every year and see how I feel,” Mikel told NFF media.

“Obviously the young players are coming, I think before the next one comes around again I will be 34 or so.

“I think this will probably be my last Afcon but I’m not 100 percent sure yet. I have given so much to this nation and at some point, you have to let go. I don’t want to overstay my welcome.

“I will leave when I feel the time is right. Let’s hope we can make it count.”

Mikel was part of the Nigeria team that won the Africa Cup of Nations title six years ago but he still desires to win more silverware with the Super Eagles.

“I’m always hungry to win if I didn’t want to win then I would not be here. I don’t just want to come in and play the Nations Cup.

I have played so many games and there is no point that I’m just coming to play. I’ve come to win,” he continued.

“And that’s the same mentality I want to put in the younger ones to win. I know for some of them, it is just their first time and they just want to play but they need to have the mentality of going to win.

“That is the mentality that I have and hopefully, I can translate this from my performance on the pitch and outside the pitch when talking to them. Hopefully, we can do great things in Egypt.”

When he finally decides to hang his boots, the 32-year-old revealed that he will not be taking up an immediate role in football.

“Life after football? I don’t know if I will still be in the game, I have a lot of things going on,” he said.

“I like to do business, I’m a business guy so I don’t know if I will have time to be in the game.

I love the game but who knows, maybe one day, I might come back to the game but at this point, after football, I am not thinking about being in the game.”

The Super Eagles have been paired in Group B against Burundi, Guinea and Madagascar for the Afcon finals in Egypt.

They will kick-off their quest for a fourth title against Burundi at the Alexandria Stadium on June 22.

Source:Goal.com
Posted by Daniel Update at 11:04 AM