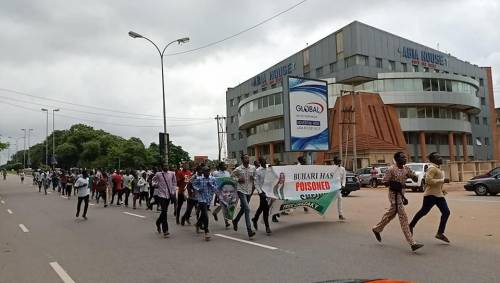 According to SaharaReporters, the Islamic Movement of Nigeria (IMN), otherwise known as Shiite, has threatened to continue with the #FreeZakzaky protest in Abuja, saying that attempt to proscribe the group by the government would plunge the country into crisis.

The spokesperson for the movement, Abdullahi Musa, stated this on Tuesday in a telephone conversation with SaharaReporters.

He said the group does not carry arms as been insinuated by the government and security agencies.

He warned the government to have a rethink before prescribing the movement as a terrorist group.

Musa said, "Yes, we will come out to protest. Anybody that is planning to proscribe the movement is planning to put this country into crisis so that they will benefit because they have been benefiting from it.”

He explained that the government had benefited from the previous crisis of the Boko Haram terrorist group.

He accused the government of promoting the killings of their members just as he vowed not to be intimidated or suppressed by the guns.

He stated that it is their constitutional right to protest and demand justice.

He debunked the allegation that members of the group killed the Deputy Commissioner of Police.

He said that they never killed anybody because they are not trained to kill people. He said that the police officer was killed as a result of indiscriminate shooting by the police. He admitted that the officer came close to them to appeal with the protesters but was hit by a stray bullet from behind which pierced through his head.

He said, "That is a big lie and it is a shame for them saying this. They said that he was trying to talk to us but the bullet came behind him. Who was behind him? The police officers killed a lot of people, even innocent people that were walking on the street. They were the ones that shot him, are we armed?”

As of the time of filing this report, the group has started mobilising their members to regroup for another round of protest.
Posted by Daniel Update at 2:47 PM