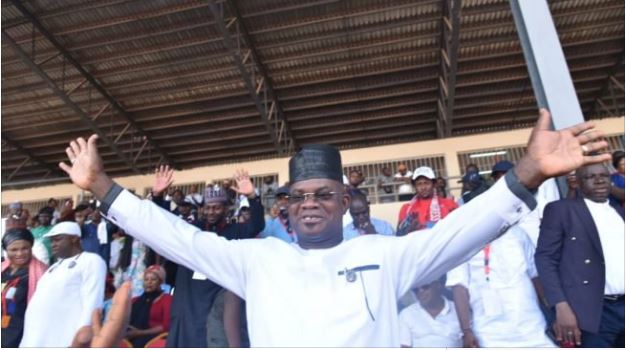 Yahaya Bello, governor of Kogi state, caused a gridlock in Gwagwalada, along Abuja–Lokoja road, on Wednesday, after spraying money on passersby, according to a report by Daily Trust.

It was gathered that the governor, who was travelling in his convoy from Abuja to Lokoja slowed down at Madam Mercy junction and brought out three bundles of N500 notes and threw them at passersby.

It was reported that during the gridlock ,which lasted for ten minutes, the governor wound down the window of his vehicle and displayed eight of his fingers (4+4) as some transport workers at Wazobia Park hailed him.

Some pedestrians, petty traders and commercial motorcyclists reportedly abandoned their motorcycles and scrambled for the money.

Bello is seeking a second term in office on the platform of the All Progressives Congress (APC).

He won the party’s primary election and would fly its flag in the November 16 governorship election in Kogi.

Musa Wada, candidate of the Peoples Democratic Party (PDP), vowed to unseat Bello through an issue-based campaign.
Posted by Daniel Update at 8:24 AM