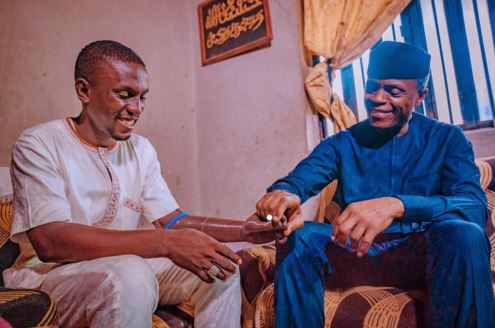 
It was an emotion galore at the rustic village of Jimeta in Yola North of Adamawa State when the Vice-President, Professor Yemi Osinbajo presented a prosthetic limb to an amputee, Mohammed Adamu in the community.

For hours, the young man could not hold back his tears of joy, seeing the Vice President coming to sit in his room to present the artificial limb to him. It was learnt that Adamu lost his arm last year when he was attacked by a local gang.

An elated Adamu, who lamented that he had been rendered incapacitated with the loss of his arm since he was attacked by the hoodlums, said that with the provision of the artificial limb, the Vice-President had rekindled his hope while some of his ambitions could be actualised.

The young man, who now works as tailoring assistant, commended Professor Yemi Osinbajo for the gesture, saying that he hoped to continue his studies in Crime Prevention.

Speaking on the humanitarian intervention, Vice President Osinbajo described the gesture as part of the Federal Government’s driven interventions under the National Social Investment Scheme Hubs.

Professor Osinbajo explained that NSIP Hubs are Federal Government supported but private sector-led hubs that were established to prioritize creativity and home-grown solutions to regional challenges, adding that Mohammed became a beneficiary of the North-East Humanitarian Innovation Hub.

Writing on his verified twitter page, Professor Osinbajo said: ”In Adamawa, it was my utmost pleasure to meet Mohammed J. Adamu who lost his arm when he was attacked by a local gang last year. Because the hubs are designed to create solutions, Mohammed became a beneficiary of the North-East Humanitarian Innovation Hub. He received a new prosthetic limb from the Northeast_iHub and now works as a tailoring assistant. ”
Posted by Daniel Update at 8:19 AM