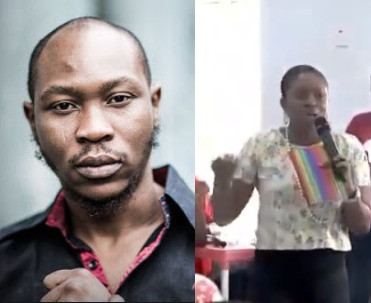 
Seun Kuti, son of late Afrobeat legend, Fela Anikulapo Kuti, has lashed out at a lady for telling a group of boys not to end up like her twin brothers who got arrested and spent six years in jail after going to dance at Fela's shrine.

In a video posted on his page, the lady while advising the young boys against becoming Marlians, said;

There was a Fela in our days. When we were growing up, there was a Fela. I had my own elder brothers, that were shrine gang. They would go to the shrine every Friday. Let me tell you the good news. Two of them stayed in Kirikiri for six years.


In that process, my father became very poor. My mother, if you see my mother and they told you her age, you would not believe. She sold her wrapper, sold her clothes, sold everything she had. My father sold two cars to be able to get these guys out of Kirikiri. It didn't work. Unfortunately, they were twins. That is what Marlian life does to you. They went to Fela's shrine, they went to dance. There was a fight. Poliuce came and packed all of them.''

Angered by the lady's statement that her brothers were arrested because they were in Fela's shrine, Seun wrote

See all these Lies by these idiots. Fela Name don full everyone mouth. These idiots that know of nothing sacred. Now this one is talking about her brothers that went to shrine and police locked them for 6 years for fighting? Does that make sense. I grew up in the shrine, where is my Kiri Kiri record. Let me advise Nigerian Parents, it’s ur duty to raise your kids and this woman is just as dangerous to their psyche as the ‘Marlian’ syndrome u are afraid of!
It is because we allow people like this interact with our children we have an educational system that tends to reduce justice as it produces lawyers, reduce health as it produces doctors and created ignorance as it produces teachers hence the more lawyers the less justice. The more doctors the less health and the more teachers the more ignorance. Everyone just dey disrespect Fela as dem like, now this goats and her goat twins have gone to prison for ‘6 years for fighting’. Better tell the world that ur brothers were robbers. Ode!! #getthesax

Posted by Daniel Update at 3:10 PM