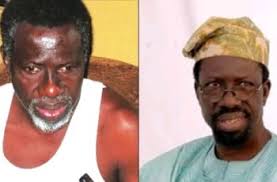 His death was announced by the President of the Theater Arts and Motion Picture Producers Association of Nigeria, Mr Bolaji Amusan, aka Mr Latin.


“Yes, he died this (Sunday) afternoon. He is a good man who lived an extraordinary life,” Amusan told The PUNCH on the telephone when contacted.

According to her, the actor died after a brief illness.

She wrote, "Our model veteran actor Pa kasunmu Kayode Odumosu finally takes a bow. It is with so much heavy pain in our hearts that we regret to announce ur in Para, that our #paraafricafoundation model actor Pa kasunmu has given up the ghost after a brief illness.


The news was broken by a close source that stays around the hospital he gave up the ghost. We will keep u updated with further information on this."