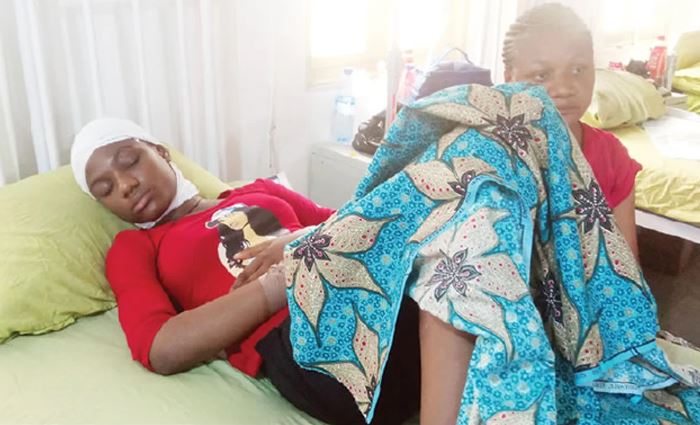 According to The PUNCH, the families and friends of some of the victims of Sunday’s explosion in the Abule-Ado area of Lagos State have continued to share their grief over the incident that claimed 20 lives on Sunday.

For instance, Ada Nnaji, the mother of the head girl of the Bethlehem Girls College, Ogochukwu, said she thought her daughter was dead when she saw her in the hospital.

Ogochukwu was among the 50 pupils of the college, who were injured when buildings on the school premises collapsed on them as Mass was being celebrated.

The impact of the explosion destroyed over 50 houses and many vehicles parked in the area.

The Principal of the Bethlehem Girls College, Rev. Sr. Henrietta Alokha, was killed while rescuing the schoolgirls.

Speaking to one of our correspondents at the Nigerian Navy Reference Hospital, Ojo, on Tuesday, Ada said the person, who called her, did not tell her what had happened to her daughter, adding that she was just told that Ogochukwu had been rushed to hospital.

She stated, “I was in the house at the Alaba International Market area preparing for church when someone called me that my daughter had been rushed to hospital, but the person did not tell me what happened to her.

“I immediately mounted a motorcycle and when I got to Abule-Ado, I saw thick smoke and when I asked the motorcyclist what happened, he just told me that it was the market in the area that was burning. I didn’t know that the thing had affected my daughter’s school.

“When I got to the hospital and saw my daughter soaked in blood, I thought she was dead. She was in a critical condition when she was brought here; she had cuts on her head, neck and legs; and her thighs were stitched up.

“When I asked her what happened, she said she and the other pupils were in the chapel for Mass when the explosion occurred and that she did not know how she came out of the place. She said when she fell down, something fell on her. I’m happy that my daughter did not die and is responding to treatment.”
Posted by Daniel Update at 12:07 PM