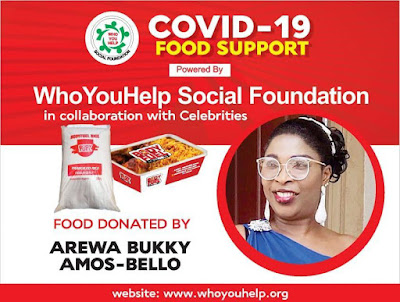 USA based actress and movie producer, Arewa Bukky Amos-Bello distributes Covid-19 relief package in Lagos and Ibadan, Nigeria. The ward winning actress and ex-international model talks about the foundation she established in honor of her late mum, Mrs Maria Oladapo. Read excerpt from the interview below..

The need for this charity is born out of my feelings for people. I am the type that empathize with people that are less privileged. I feel their pains. My heart is always troubled by their cry for assistance. It is something I have been doing for 20 years. That is why it is so convenient for me to go this extra mile with the LOCKED DOWN RELIEF FOOD & GRANT to the vulnerable.During the Lagos Lockdown, I saw some videos on social media that brought tears to my eyes. People were crying for food - people forced to feed their young children with cassava flakes (garri). Recently, a friend sent his Covid 19 relief foundation to me asking for donation, without hesitation, I quickly donated what I was able. At that point, I knew I could do more. So I called on two well known broadcasters and a Nollywood director (they are all my cousins) one in Lagos, and the other two in Ibadan asking for suggestions on how I could really support the less privileged during the lockdown.  They suggested food and grants. Grants were provided at a variation of amounts N5,000 - N20,000 depending on the beneficiary’s situation. After a few rounds of distribution, and learning that social media wasn’t a great long term solution for identifying those that needed the most help, my cousin (the broadcaster in Lagos) suggested that we formalize the process. It was then that MARIA OLADAPO FOUNDATION was born. 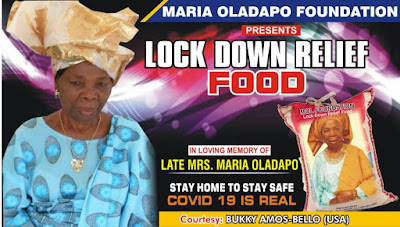 On those that can benefit from this gesture. She said,

The less privileged; young, old, male, female, able, disabled, etc.We started in Lagos. Grants were given out to support the people most affected by the lockdown. We started with the homeless and less privileged. In Lagos that is totally urban, we targeted the class of people that could not afford even 2 meals per day before the lock down and during Covid-19 pandemic period.

In Ibadan, our main focus is to feed the POOREST that are Poor. It was very hectic reaching them. We have to go into the interior of Ibadan where very aged people reside and also reached the rural dwellers. So far, we have catered for more than 5000 people.

Through word of mouth from friends, organizations, churches and the media, we have been able to reach the hands of those that needed it the most - widows, orphans, single parents and others facing hardship.


On how are they are zoning the distribution:

We’ve hired 20 people across Ibadan and Lagos, they helped with the local in-person distribution. From Ogba, Isheri, Ikorodu, Agege, Akowonjo, Egbeda, Mowe, and many other areas in Lagos.

Our targets go beyond Lagos. We have our office located in the ancient city of Ibadan which is the capital of South West. That alone makes our intention a utility one. With that our location, we are so close to the grassroots where a meal per day is a normal feeding system. So, we decided to decentralize our distribution by engaging other NGOs to help reach people here and there. For instance, in Lagos, we contributed in cash to Yomi Fash Lanso's foundation. In the same Lagos, we were able to reach some people directly with cash depending on their financial situation.

In Ibadan, we classified the food distribution into two. The first is the giving of Garri and Elubo; that has just been concluded, and the next one is the distribution of Rice and Semovita.

On when the Foundation was set up and what other charities she has done before now:

Well, I thank God for my life. I started the cheerful giving precisely in 2000 but did not structured it into an established Foundation. Annually, I spent between 10 and 15 million Naira donating to different foundations and individuals. They were in categories. Some were widows who needed money to survive after the demise of their husband. There were students whose parents were not buoyant to fend for their schooling. That category covers from primary to tertiary education. The next are young girls that were jobless. I would provide money to set them up in order to keep them away from harlotry. And there were young men that I helped in keeping out of crime with provisions of money for one business or the other. There were medicals that i have undertaken. That is to mention but a few of what I would do on my own year in year out. But my plight was that I felt I was not reaching the real vulnerable and those from needy background. I was not convinced enough with my styles hence my establishment of MOL Foundation ie Maria Oladapo Foundation in loving memory of my late mother. At least, the NGO can do research and documents our targets. The result of that establishment is what we are having now. So far, we have reached out to over 5,000 people.

The foundation was formalized in April. I have donated to various organizations and will continue to do so, but this is the first large-scale effort I've led and executed. As Matthew 6:3 says, “When making gifts of mercy, do not let your left hand know what your right hand is doing.” I do not broadcast my support to people or organizations.

My goal is to establish this foundation in four countries - USA, UK, IVORY COAST and NIGERIA. The reason why I choose these countries will be known soon.

Talking about the movies she has acted in, and produced:

Ajitannawo was my seventh production. My first movie was titled Arewa, and it was shot in both London and Nigeria back in 2000. It was released in 2001 and that was the movie that actually gave me the household name Arewa. I joined the Yoruba movie industry (Then ANTP) in 1988 when I featured in Fatai Alabi (Adekanbi’s) movie, titled Ori-Ni. Which featured actors like Orisabunmi, the late Iyamileko, Yinka Smart, Yinka Quadri and many more. My movie Arewa also won two awards in the UK.


On her next big movie:

My next movie is called Sisi Maruwa, it was supposed to premiere on the 26th of March but due to Coronavirus pandemic, it has to be postponed. It will be released as soon as we are able to do so.


Talking about if  producing movies pay her bills. She answered,

(Laughs) No, movie production does not pay my bills. Acting is my passion and I am also an ex-international model. Additionally, I am a business woman, largely investing in real estate. And I’m also a healthcare worker; you can say I'm a workaholic.

Talking about her mentors and role models both in business and as an actress:

My role models in life are definitely my parents, they are my Ajitannawo. My values and morals are a reflection of the way they raised me and my siblings. As for acting, I look up to the likes of Iya Rainbow, Baba Wande, Baba Fokoko, Auntie Joke, iya Awero and many more.


About her journey abroad:

I left Nigeria 30 years ago to the United Kingdom shortly after my marriage. I lived in the UK until 2007, then I moved to the United States. So, home is EUROPE, USA and Nigeria.

About Nollywood as a stakeholder:

Piracy is killing the industry and I'm hoping the government could invest more into the industry.

Email ThisBlogThis!Share to TwitterShare to FacebookShare to Pinterest
Labels: Interviews