‘We Got N1m To Kill Her For Rituals, Says Suspects Involved In Murder Of UNIBEN Student, Uwaila Omozua 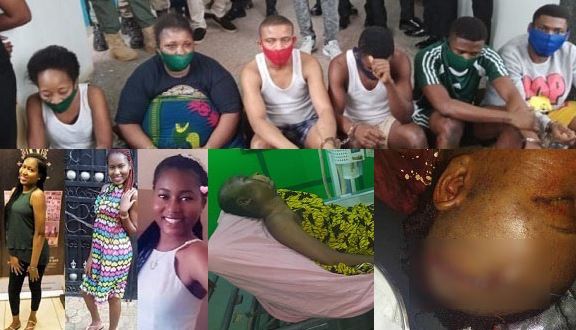 The Edo State Commissioner of Police Office, Mr. Johnson Kokumo paraded six suspects linked to the brutal rape and murder of Uwaila Vera Omozuwa, a 100-level student of the University of Benin on Wednesday, August 26, 2020.

There has been cry for justice on social media after a 100 level Microbiology student, Uwaila , was killed by some suspected rapists at a church in Benin City where she reportedly went to read on the night sometimes in May 2020.

One of the suspects Collin Uligbe from Delta State, has disclosed that Uwaila’s landlady, Mrs Mary Ade, gave them N1 million to kill the undergraduate.

Collins while interrogated, said he attends the same church Uwaila attended, that he was asked by the landlady to wipe Uwaila’s private part with an handkerchief so that she could use it for ritual purposes and prosper in her business.

However, the landlady has denied the allegation, saying she neither gave him the money nor asked him to wipe the lady’s private part.

The commissioner of Edo State, Prof. Johnson, gave the names of the other suspected killers as Nelson Ogbebor, Tina Samuel, another lady, Valentine Akato and Nosa Osabohien.

According to him, the autopsy results confirmed that the victim was raped before she was killed.

He assured the people of Edo State that the police will leave no stone unturned to unravel the mystery behind the killing.