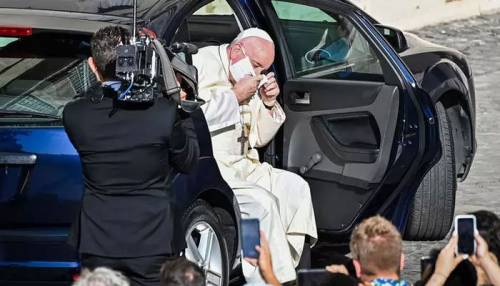 Head of the Catholic Church, Pope Francis, has worn a face mask in public for the first time since the COVID-19 pandemic began.

He wore the mask on Wednesday while attending his second traditional general audience before a limited public presence after a six-month suspension occasioned by Coronavirus restrictions.

The pontiff known for a fondness for close personal contact, however, quickly removed the mask as he emerged from the car carrying him to the audience, which was suspended in February over the Coronavirus pandemic, AFP reports.

He, however, refused to shake hands and kiss babies at the Apostolic Palace inside the Vatican as is his custom.

As he walked through, crowds of faithfuls thronged behind a barrier and lowered their masks to greet him.

The leader of the Catholic Church whose real name is Jorge Bergoglio suffered from acute pleurisy and surgeons removed part of his right lung when he was 21, according to his biographer Austen Ivereigh.

He has, however, shown little concern for his health since the pandemic began and had never appeared with a mask before Wednesday despite receiving visitors within the Apostolic Palace.

So far, the Vatican City has had only 12 cases of the Coronavirus with all recovering and zero deaths.