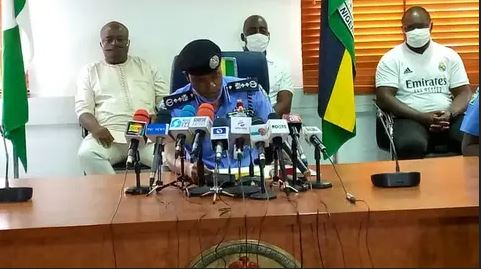 Inspector-General of Police, Mohammed Adamu during a briefing

Mohammed Adamu, the Inspector-General of Police, has unveiled the qualifications of officers to join SWAT, The PUNCH reports.

The IGP on Sunday, revealed the qualifications of officers to be trained in the new police tactical team to replace the disbanded Special Anti-Robbery Squad.

He said the training of selected officers for the Special Weapons and Tactics Team would commence on Monday, October 19, 2020.

He noted that no ex-SARS operatives were shortlisted in the SWAT team.

He also explained that “the officers selected for the training are young, smart and energetic officers who have acquired not less than seven (7) years working experience with clean service records – no pending disciplinary matters, no record of violation of rights of citizens or misuse of firearms – and are physically fit to withstand the rigour of SWAT Training and Operations.

“The selected officers shall be subjected to physical fitness test, medical and toxicology screening etc and those found to be unsuitable shall be discharged.”

Posted by Daniel Update at 3:57 PM