Buhari Meets Jonathan, Obasanjo, Others Amid Unrest In The Country 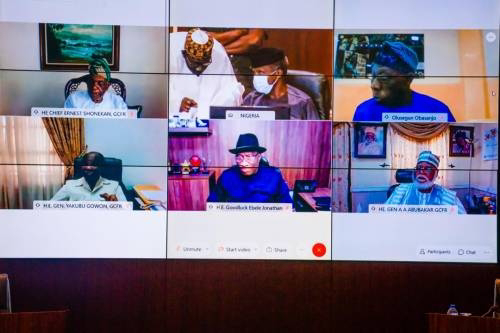 Nigeria's President Muhammadu Buhari has met with former Presidents including Goodluck Jonathan, Olusegun Obasanjo, Ernest Shonekan, Gen. Yakubu Gowon and Abdulsalam Abubakar.
The details of the virtual meeting remains unknown yet as at the time of this report but it is widely believed to be related to the ongoing agitations for a reformed Police Force.
Also in attendance in the meeting were: Vice President, Yemi Osinbajo; Secretary to Government of the Federation, Boss Mustapha; Chief of Staff to the President, Prof Ibrahim Gambari, and National Security Adviser, Major General Babagana Monguno(Rtd).