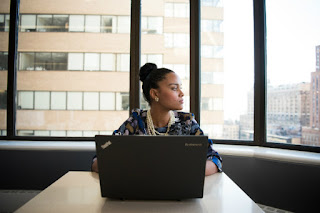 The soundtrack I had earlier picked for my alarm tune, rang through my dream, jolting me awake.

I rolled in bed, trying so hard to keep my eyes open. I worked till late the previous night and ended up getting only four hours of sleep. I got up reluctantly, chanting my usual swear “The hustle go pay las las”.

It had turned out to be a general consolatory chant “….las las, everybody go dey alright…”.

Running the quickest bath, Lex’s words invaded my mind for the umpteenth time “Writing is a passion. You are an adult now, you have to make money somehow…”

Graduating in a few weeks, She already moved her stuff from school back home. Marie too.

Lola and I still had a year. I reminisced our first year in school, how we met. From being friends of friends to become the best of friends.

Stepping out of the bathroom, I hurriedly pulled my clothes on, rolled my hair in a bond, picked up the bag containing my documents, and rushed out of the house to the bus stop.

I walked past early morning preachers, food sellers preparing a fire for cooking, half-dressed ladies with painted faces trying to get off the streets before dawn, and beggars begging for alms.

The early risers were already at the bus-stop, waiting for buses that would convey them to their various destinations. From well-suited men and women to high schoolers and traders dragging on sacks of their wares. This was their daily lives. Their daily routine. Their everyday hustle. Monotonous tasks of daily work.

“Ikeja! Opebi-Allen, Ikeja! Enter with your Two hundred Naira! I no get change o!” The bus-boy yelled relentlessly. With messy hair and jeans shorts that had seen better days, he hopped out of the bus to wrestle a tout that was threatening to smash the bus’s side mirrors if his ‘dues’ weren’t paid.

They dragged each other along, shouting curses as they went on with their unwanted drama. Commuters, on the other hand, rushed into the empty bus; Well suited men and beautifully dressed women were struggling, pulling, pushing, as each person tried to secure a seat. It was a sorry sight.

I moved a few feet away from the chaos, to keep my outfit from getting ruined. Staring down at the file-bag in my hand; It was my sixth proposal. Eight months went.

Life as a writer wasn’t as ‘Easy and fun’ as people had chosen to see it. There are days of being blank and complete emptiness, days of being sad and unexplained moodiness, days of creating masterpieces that would end up being ridiculed by others instead of being praised and accepted. I sighed.

The bus-boy continued his chanting after he had finally succumbed to the tout’s ‘Hundred Naira’ demand. “Allen, Ikeja! Two more chance! Allen, Ikeja!”. The bus made to pull out of the bus-stop when it halted suddenly.

“Madam come down jhor! Come down!,” The bus-boy yelled angrily at a market trader.

“Madam come down! I no collect hundred Naira! I say commot for my bus this woman!” He continued again in pidgin. The middle-aged woman slowly alighted the bus with her sack of fresh vegetables.

But the answer remains ever so clear ‘I don’t want to be an obnoxious reporter, writer, or journalist who chases celebrities and public figures across parking lots or buildings and shouts questions at slammed doors’. I am MORE. And this is me working hard to be More.

Another bus pulled up.

“Ogba-Ikeja!”. Moving carefully towards the bus, so as to avoid contact with the market traders and their sacks of raw fishes and vegetables; I couldn’t afford to get my clothes soiled, the First impression mattered greatly.

I boarded gently; choosing a seat by the window. I held the exact Two hundred Naira fare in my hand to avoid embarrassment; The bus-boys were naturally sporadically rude. As the bus pulled out, holding tightly onto the file-bag, I concluded it was going to be the last time. The last one. The last proposal.

Email ThisBlogThis!Share to TwitterShare to FacebookShare to Pinterest
Labels: Articles