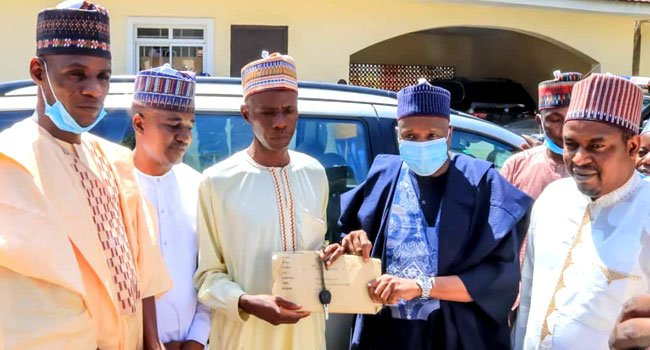 Mr. Dahiru Buba, the man who reportedly trekked from Gombe state to Abuja to celebrate President Muhammadu Buhari's victory in the 2015 general elections has finally been rewarded by Gombe state governor, Inuwa Yahaya.
News broke out last week that Mr. Buba has developed limb pains and was crying out for help.
However, the media aide to Gov. Yahaya, Ismaila Misilli has confirmed that Mr. Buba has been reached out to by the governor and is now receiving treatment in a private orthopedic hospital.
He has also been rewarded with a cash prize of N2 million and a car by the governor in a private meeting with the governor and some other top politicians in the state in Abuja yesterday.
According to the Misilli, "For taking the pains and risks to show solidarity with Mr President and our great party, people like Buba should not be neglected.

“By embarking on that solidarity trek, Dahiru Buba had shown patriotism and support, he should therefore be appreciated and encouraged,” the governor said when he received Buba.

He added, “So, on learning about his condition, first I directed that he should be taken to the hospital for proper medical attention and I am happy that he is now better after undergoing his first round of treatment.”

Governor Yahaya also thanked Mr. Buba and added that the cash gift was for him to get an accommodation of his own since he was yet to have one.

"As far as we are concerned in the APC and in this administration, no genuine effort or sacrifice will go unrewarded, no matter how long it takes.

“So, on behalf of our dear President and our beloved party, we say a big thank you for your show of support and solidarity,” Governor Yahaya added.

Posted by Asiwaju Cephas at 7:37 AM