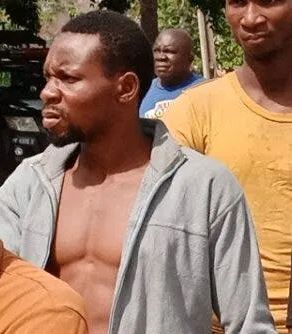 A supremacy war between cultists in Ondo state has resulted in the beheading of a rival.

The suspect, a 26 year old cultist, Tolu Omojuwa has confessed to the crime.

According to him, his group, ‘Eiye fraternity killed three members of a rival cult group known as Black Axe over supremacy tussle in Igbokoda, headquarters of Ilaje council area of Ondo State.

Omojuwa who was paraded alongside 33 other criminals by the state police command in Akure, weekend, said the two rival groups had been having a running battle over supremacy tussle in the oil rich riverine area of the state for over three years.

Speaking with newsmen, the suspect said ” My group Eiye group had for long been having clashes with ‘Aye’ fraternity, otherwise known as Black Axe group in the community and this had led to the killing of three of the ‘Aye’ members also known as Black Axe by my group.

According to him, the clash between the two cult groups had been on since 2017 within the community.

The suspect disclosed that he was arrested when he was invited for ‘peace talk’ by leaders in the community.

Meanwhile, four other suspects were arrested for cutting off the head of a corpse in the mortuary in Ajowa Akoko area of the state.

The state police commissioner, Bolaji Salami said ”on 15th December, 2020 at about 1400hrs, at Ajowa Akoko, the Detectives of Ondo State Command received an information that On the 25th day of November, 2020 the head of one of the corpse in the mortuary at Ajowa Akoko was cut off and taken away by unknown person/persons.

“On interrogation, the suspects confessed to the commission of the crime. They will soon be arraigned in court.

The Commissioner of Police, Bolaji Salami maintained that investigations were still on towards unearthing other atrocities and accomplices of the criminals.

Salami assured residents of the state of maximum security during the yuletide.
Posted by Daniel Update at 9:43 AM