Why I Didn't Pay Burna Boy A Dime to Feature in My Song, Jerusalema - Master KG Reveals 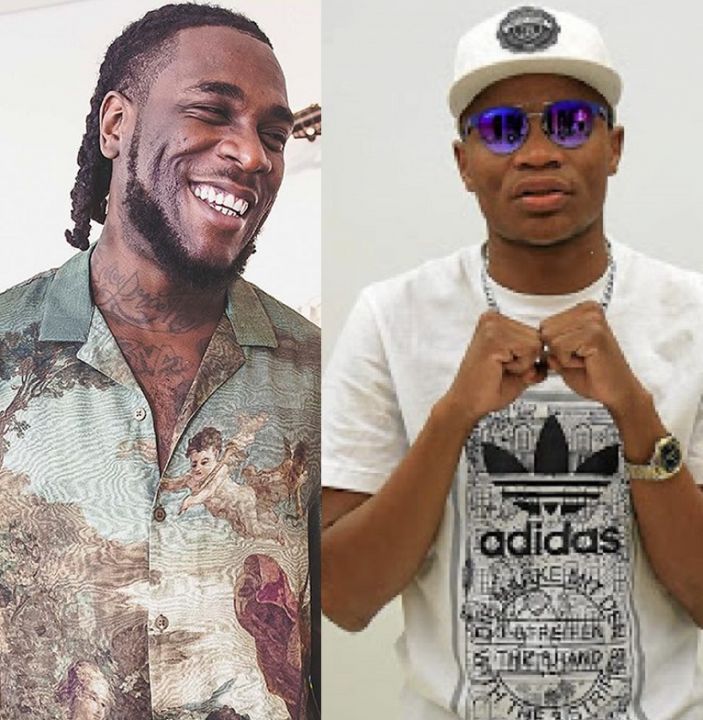 Burna Boy and Master KG
It has been revealed that Burna Boy didn't receive a dime from South African musician, Master KG to feature in his song, Jerusalema.

Master KG himself revealed that he didn't pay Burna Boy any money to take part in the remix hit song as is done in the industry.

Although the original version of the song is a commercial success, the remix which features the African giant, has surpassed the original song’s success.

While listing his achievements in 2020, Burna Boy via his official Instagram handle noted that Jerusalema remix is certified gold in Austria, diamond in France and platinum in Belgium.

In an exclusive Zoom interview with The Punch, Master KG said the main reason there was no payment for the feature is because the original song was one of Burna Boy’s favourite music.

Master KG said, “I did not pay Burna Boy to feature on the remix of the song, Jerusalema. There was no paid fee for this feature to happen. The amazing thing about the song is that it was already popular. According to what I heard, the song was one of his favourite songs as well. It was so easy to make it work and make the collaboration a success. So, there was no payment for the feature.


“I also feel that the reason there was no money involved is because Burna Boy also loves the song and he related well with the song. It was not something he did for money instead he did it because it comes from his heart.”

The multiple award-winning South African singer further revealed that he was surprised when Burna Boy sang in Zulu language on the song. He said, “I remember the first time I heard his verse, he sang in Zulu language and I was shocked. I asked him where he learnt the Zulu language from but he just said, ‘don’t worry about that. How do you feel about the song?’ It was amazing. A lot of people think that he asked me how to pronounce the words but he never did that, that shows you that he is an African man and the African giant. He showed that we are all one in Africa despite the languages we speak.”

Master KG mentioned that the reason he featured Burna Boy on the song is because he is ‘one of the best of the in Africa.’

He said, “The reason I asked Burna Boy to feature on the remix of the song, Jerusalema is because Burna Boy is one of the best in Africa and he is my brother. I felt that this song is not just a song for Master KG, it is a song for the world and in order to take it further into the world, I wanted someone from Africa to feature on the song; I could not think of anybody other than my brother Burna Boy for us to take the song further.


“My team reached out to him and he agreed. It was great because Burna Boy was also aware of the original song, it was not new to him so that also made things easier for him to relate and accept to be part of the song because it is something that he knew about. It was all good vibes. We shared ideas, he recorded the song and sent it back. He asked for my thought on his verse and I told him I was blown away.”

The musician who visited Nigeria about a week ago told The Punch that he has fallen in love with Jollof rice. He further revealed that he has begun to work with other Nigerian artistes. “I was in Nigeria about a week ago and I will still work with more artistes from Nigeria. We are one in Africa. I am already working with some artistes but I will not want to let the cat out of the bag; just expect some good music from Master KG and my brothers and sisters from Nigeria.


“When I came to Nigeria I fell in love with jollof rice, I ate it every time from morning till night. I really enjoyed it. I also love the Nigerian scenery. I felt the good vibes.”

A nominee in the MTV Africa Music Awards Best Male and Artiste of the Year category, the entertainer told The Punch that he was happy about the nomination and would not feel bad if he doesn’t win.

“It is amazing to be nominated for the MTV Africa Music Award. It is a celebration. I am not the only one celebrating but everyone that was nominated as well. It is a reward for the work we have done to promote our culture as Africans and taking African music to the world. It is a celebration for me whether I win or not, for me, it shows that they see the work that we put out there and they see the amazing impact the music is having. I am so happy for the nomination.”
Posted by Daniel Update at 4:49 AM