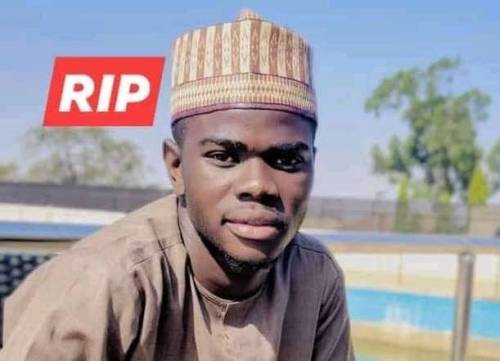 Sadiq Sanga Yusuf
According to SaharaReporters, Sadiq Sanga Yusuf, one of the three students of the Greenfield University, Kaduna killed by suspected bandits has been buried amid wailing and tears by family members and friends.

It was gathered that Sadiq was the son of Malam Yusuf Mu’azu, a Director of Kaduna Ministry of Works.

He was buried with outpouring of condolences to the father, who was also a former chairman of Jemaa Local Government Area in Kaduna state.

Sodiq’s body, along with those of Dorathy Yohanna and Precious Nwakacha were on Friday found in Kwanan Bature village, a location not too far from the school premises.

Kaduna is one of the states in Nigeria most affected by rampant kidnappings by bandits.

The invasion of the university was the third attack by bandits on schools in Kaduna in 2021.

Meanwhile, a Twitter user, @ydcoalhas narrated the painful ordeal of finding his sister-in-law, Dorathy among the three students who were killed.

In a series of tweets directed at Tolu Ogunlesi, Special Assistant to the President on Digital and New Media, he said, “People’s children have become sports for bandits and kidnappers. I’m very angry right now because there’s just so much I don’t understand anymore. What’s the purpose of life as a Nigerian? What’s the sole responsibility of a government for/to the people?”
Posted by Daniel Update at 11:46 AM