Tragedy As Man Kills Neighbour, Buries Her In Compound (Photo) 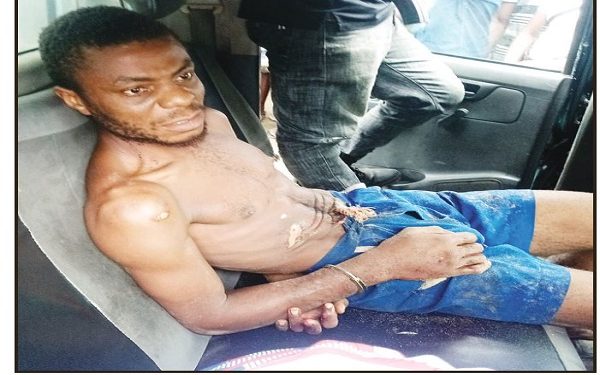 A man has been arrested in Calabar for killing and burying his female neighbour.

The man also decapitated the woman and buried her parts in his compound.

Christian Edem Eyo, 24, reportedly perpetrated the act early Wednesday in the compound which he shares with the victim, a mother of two said to be in her 60s.

The suspect also called Etteobong buried Uduak Effiong’s body in a shallow grave he dug in front of the compound, and cast the head into one of a pair of 10-foot-deep graves in his bedroom.

The woman lived with her children in a separate apartment in the same compound as the suspect.

Handcuffed in the backseat of the police van, Eyo told reporters that he killed the woman because she tried to seduce him.

What about the two graves in his inner room?

“They are for empowerment,” he replied. “It is an empire, there is another family inside.”

A source said “he may be involved in ritual practices because he often behaves like one with mental problems”.

There were blood stains in the room as well as in front of the compound where the woman’s body was buried.

Nkoyo, one of the deceased woman’s children, said the incident happened between 5am and 6am.

A neighbour, who saw Eyo burying the woman, called the vigilantes, who called the police.

When the police came, shooting, the suspect attacked them with a machete before they arrested him, Nkoyo said.

Police at the scene refused to grant any interviews, neither did Police Commissioner Sikiru Akande respond to telephone calls.

When Eyo’s father who lives a short distance away was informed of the development, he reportedly retorted, “What’s your business? He killed his aunt, let them take him away, they will soon bring him back.”

He then picked up a shirt, shut the door and went out, a source said.
Posted by Daniel Update at 7:36 AM